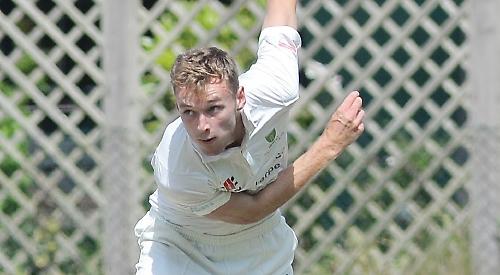 HENLEY put on a display full of character to overcome OXFORD and extend their lead at the top of the Home Counties Premier League Division 1 table to 39 points with three games remaining last Saturday.

Despite only managing 114-8 in their allotted 50 overs the visitors never looked in doubt and thanks to some highly skilled bowling, notably by Nugent and Afridi, were able to skittle Oxford out for 76.

The victory leaves Henley in a commanding position in the league, although there are still plenty of banana skins to avoid before they can think about being crowned champions.

Having won the toss on a wicket renowned for its seam movement, turn and low-scoring affairs, Henley skipper Michael Roberts elected to bat in order to make the most of what should have been the best time to bat.

His decision seemed questionable when both Oxford’s openers, Fallah and Junior Musk, were managing to extract large amounts of seam movement and beat the bat with regularity.

It didn’t take long for them to strike, as Matthew Rowe nicked a good ball from Fallah through to the keeper, before Musk accounted for Waqas Hussain and Michael Morris in quick time, the latter being bowled by an unplayable delivery which pitched on middle and clipped the off-stump. This left Henley 11-3 after eight overs, a position in which this team rarely finds itself. Despite the poor start, Roberts and Euan Woods applied themselves diligently, playing low-risk cricket and preventing any possibility of a complete innings collapse. Both were moving along well before Roberts departed on the stroke of drinks, bowled by a ball which wasn’t quite there to pull, leaving Henley on 56-4 at the halfway stage.

The low run rate reflected a combination of good bowling and a particularly unfriendly wicket, which made scoring hard to come by.

After a few overs’ consolidation after drinks, Woods was the next man to go, bowled whilst attempting to slog the effective off-spin of Eltham. Jack Davies was then run out soon after and once Zia Ashraf and Stewart Davison departed, the former caught behind and the latter bowled after playing on, it was left to Henley’s opening bowlers to ensure they batted out the overs and posted something respectable.

It was becoming clear that anything over three-figures was going to be competitive. Both Tahir Afridi and Tom Nugent guided Henley past 100 and after batting out the last 14 overs together, walked off the field after 50 overs with Oxford requiring 115 runs for victory.

For the first 20 overs of the Oxford reply, the Nugent and Afridi show continued, only this time with their favoured skill sets on display. With both bowlers pumped up and a fielding side ready for any opportunity, the middle became a truly hostile environment.

Tong-Jones was the first to go, lbw to Nugent, before Afridi trapped Perkin lbw, after which Nugent nicked off Oxford’s dangerous overseas Ayub for just three.

When Afridi trapped Charlesworth lbw a couple of overs later, Oxford were reeling on 33-4 after 13 overs, with their match-winners back in the hutch. Eltham showed some resilience in the Oxford middle order, however continuously lost partners at the other end.

Nugent soon nicked skipper Barrett to his counterpart Roberts at second slip without troubling the scorers, before having Mendis brilliantly caught at cover by Morris. Afridi then nicked off Simon to leave Oxford on 51-7 after 20 overs. Both Henley opening bowlers were outstanding, and in many respects were the leaders with both bat and ball on the day. It didn’t take long for Gurveer Singh to dismiss Eltham, trapped lbw, and Hussain to clean up the tail, despite a few hefty blows by Fallah to bring Oxford up to their all-out total of 78.

The result means a win against Tring tomorrow (Saturday) will mean the league- leaders requiring just two points in the remaining two games to secure the title.

However, Roberts was quick to shut down any ideas of complacency. He said: “A great win today has clearly put us in a good position, but we will just continue to do what has worked for us week-in, week-out so far this season, and that’s taking care of our training in the week to give us the right to go and express ourselves on the weekend.

“Over the next three games, we’re looking to perform better than we have done so far this season and that is our priority.”