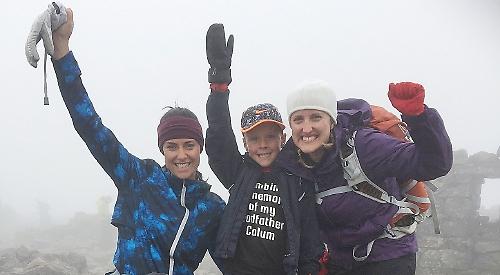 DAVID STOBIE is a boy of his word. After climbing 1,085m Mount Snowdon a year ago, the eight-year-old from Henley vowed to scale another peak — and now he has done just that.

He reached the summit of Ben Nevis in the Highlands, Britain’s highest mountain at 1,345m, accompanied by his mother Sarah and Helen Stacey, who also with him on the Welsh climb.

The trio once again raising money for Cancer Research UK in memory of Ben’s godfather, Calum Jack, who died of cancer two years ago at the age of 41. They took four hours and 25 minutes to complete the challenge and so far have collected £1,015.

David, a pupil at Trinity Primary School in Henley, said: “The climb was very, very cold but there was an amazing view as we got nearer the top. I kept climbing because I knew I could do it and that I was doing it for charity.

“The hardest bit was near the top when it got very steep and slippery. It was very different from climbing Snowdon because there was a better view but it was very steep and rocky and not as easy to climb.

“It took us eight-and-a-half hours to get up and down and there were no toilets or anything at the top!”

David, who lives with his mother, a teaching assistant, and father David, an IT worker, and sister Isabella, six, in Deanfield Road, wore the same
T-shirt from a year ago, bearing the words: “Climbing in memory of my godfather Calum”.

Stobie, 36, said the climb was tougher than last . “It was pretty much non-stop with a few food and water stops along the way,” she said. “There are no straight roads, it was all climbing. David is quite a fit child so he led the whole way up and down. He found it easier than we did.

“Rain hit us at about the halfway mark and the clouds came very low so we lost some visibility but we decided to keep going when others turned back.

“Then, amazingly, the cloud lifted just at the point where we had started to think we weren’t going to make it.

“I am so proud of David’s achievement. He showed no signs of giving up and had the determination and courage to lead us both up and down the mountain, singing and laughing the whole way.

“As soon as he had completed his climb last year he swore he would complete another challenge and he has kept to his word. Now he is deciding on what next year’s challenge will be.”