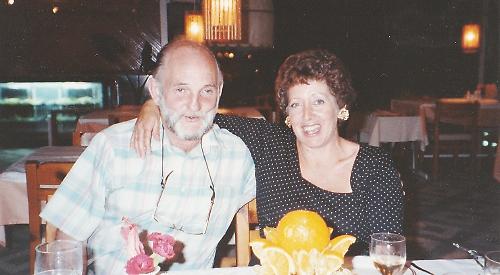 IN the early Seventies, Leo was operating around the photography and printed materials industry , working in the foil blocking industry, supplying heat-applied metallic foil to businesses in Oxfordshire and Berkshire.

Then he became aware of a revolutionary new product that would transform an industry and help him to enter the business that would define him over the next 30 years.

Until this point offset lithographic printing had required expensive metal printing plates to be created. This created high set-up costs, which meant that any formal printed material was expensive and generally monotone.

The invention of the paper plate meant that proper printed materials came within reach of a much broader customer base and greater use of colour became possible.

Leo quickly realised the potential of this innovation and very soon after that Henley Instant Print, or HI Print, became an integral part of the local business scene.

This industry continued to evolve and it was the parallel developments in photocopying which came to be synonymous with Leo and his impact on the local business scene.

Those entering the HI Print shop on Reading Road would have been regularly greeted by the sight of Leo painstakingly aligning some form of printed material on the glass plate of one of his large copiers to make sure that the finished product was perfect.

Fifteen years later, HI Print was integrated into the Higgs Group, publisher of the Henley Standard, but Leo’s involvement in the printing industry continued and evolved. He co-ran Alphabet Print & Design in Chalgrove, near Thame, for several years before innovation beckoned again.

Always quick to spot and exploit new opportunities, Leo founded Planet Print in Aylesbury, again bringing a broader range of printed materials within reach of a much broader customer base, this time adding garment and promotional material printing to his traditional areas of expertise of photocopying and instant print. Innovation was a key theme throughout his life.

Leo witnessed tremendous change over the course of his life and he was always inspired, not intimidated, by it.

Born in March 1937, Leo grew up in wartime Britain.

He was the son of a career soldier who served throughout the Second World War and participated in many of the most well-known battles, including the Dunkirk Evacuation, El Alamein and Operation Market Garden. Considering the monotone nature of his early years, Leo might have been forgiven for taking a monotone approach to life but this could not have been further from the case — colourful was a word that was frequently used to describe him.

He was plagued by illness at key times during his school career and it is a great unanswered question over what direction his life might have taken had his education matched his undoubted intelligence and talent.

He left school at 15 to take up an apprenticeship at Bushnells Boatyard in Wargrave.

He went on to hold a multitude of roles across a broad range of industries, including freight and haulage, manufacturing, as well as being a publican. Hard work was one theme that bound all these pursuits together.

In 1970 Leo met Val and they were married in February 1972. They moved into a waterside property in River Gardens, Purley.

As was typical of him, Leo and Val transformed this from a small wooden chalet, without indoor amenities, into a modern home that still stands.

In 1985 Leo and Val moved to Northend, just outside his home town of Henley, in order to accommodate Val’s mother Alfreda, who had herself been bereaved a few years earlier. This was typical of Leo, thinking of others first.

Leo and Val ran the former Nag’s Head in Northend for more than a year. He would work 12 hours a day running his printing business before heading home to run a pub for another few hours.

Unfortunately, the ongoing commitments of running both businesses became too much, so it was with great regret that Leo and Val took the decision to close pub and convert it into a family home — family came first.

In 2004 Leo and Val moved to Calne in Wiltshire to start to really enjoy their retirement. For several years they owned a small property in south-east Spain, where there spent a number of lovely summers.

Leo was truly a pillar of the community wherever he happened to be living at the time.

His contribution to the Henley community was diverse and extended. He was a long-standing member of Henley Round Table, serving as chairman in 1975-76.

His association with the Round Tablers continued into the local 41 Club and again he served as chairman.

Through HI Print. Leo sponsored the Henley YMCA football team of which he was very fond.

Leo was also a long-standing town councillor and served on the planning committee.

After moving to Calne, Leo continued to play a strong role in the local community, joining the Calne 41 Club and volunteering as a driver for the Calne & District Link scheme. Through his local association memberships, Leo channelled his strong belief in charitable contribution.

The various charities that benefited from his hard work and enthusiasm are too many to mention but one in particular stood out — the air ambulance.

While at Northend during a hot summer, Leo was working in the garden when, unbeknown to him, a wasp was lurking inside his drink. After taking a swig, he received a nasty sting in the back of his throat.

Realising that he was having an allergic reaction, Val called an ambulance. But, given the remote location, the air ambulance was despatched.

The fantastic treatment Leo received from the crew proved to be the start of his long association with this insitution.

Leo had a long, full and happy life and he was active and vibrant right to the end.

A few months before his untimely passing, he hosted a joint 80th and sixth birthday party with his granddaughter Mathilda Lily Cook. This party was the epitome of Leo’s life — he caroused the night away surrounded by several generations of family and close friends. He literally had the time of his life.

In a testament to his eternal youth and his selfless desire to make sure those around him had a good time, he finished the evening in the early hours, ferrying people around in his customary “seven-seater” and generally making sure everyone got where they needed to be.

This was a small vignette of Leo and there were many, many such examples of this selfless and fun-loving attitude.

Sadly, Leo passed away on Tuesday, August 1. He is survived by his wife Valerie Gay “Val”, sons Joel and Peter John and grandchildren, Mathilda Lily, Wesley Peter and Felicity Marie.

Leo passed on his creativity, work ethic and attention to detail to his sons.

Joel obtained degrees in law and history and archaeology from the University of London and is now a managing director in the regulatory compliance department of a major international bank. He is married with three children and lives in Singapore.

Peter holds masters’ degrees in aerospace engineering and dynamics engineering as well as a postgraduate diploma in international security and works for the Royal New Zealand Air Force as an aircraft structural integrity manager. He is based in Wellington.

Having worked alongside Leo in several of his businesses following her own successful career in hairdressing, Val is now retired and lives in Calne.

If desired, friends may make memorial contributions to the Wiltshire Air Ambulance at www.wiltshireairambulance.co.uk/get-involved/donate