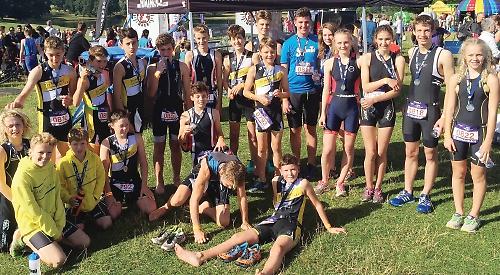 NEXT month will see Tri Henley – the junior triathlon club for the Henley area – celebrate its third anniversary.

In their distinctive yellow hoodies and tri suits, the club was launched in the autumn of 2015 and is aimed at secondary school aged children who are passionate about swimming, running and cycling.

The club now has 26 members across ages 11 to 18. Members receive training from a core team of seven British Triathlon-qualified coaches. Shiplake College has become the club’s home training base, along with Westhorpe Water Sports Club in Marlow for open-water swim training, Palmer Park velodrome for cycle time trials and the Henley Leisure Centre for swim skills.

Over the last three years a number of athletes within the club have placed in podium positions in the British Triathlon South Central regional competitions.

This year the club is currently placed as second best performing squad in the Inter-Club championships and will host the regional club awards evening in November.

Tri Henley has produced some consistently high performing athletes since its inception, including Adam Hunt, U14 boys, who has won the club’s athlete-of-the-year award for two years running. This season he finished second in two regional competitions, first in the Lidl Triathlon at Dorney Lake and sixth overall in the individual regional championship.

The Doyle brothers – Harvey (U12) and Ollie and Ben (U14) – have seen Ollie qualifying for the South Central regional team last year and Harvey placing eighth in the overall regional championships for 2017.

A highlight for the club was when Scott and Isobel Barnett both qualified in the U16 youth category for the British Triathlon National-level Super Series.

Meanwhile world champion gold medallist in triathlon Sophie Whitworth has been appointed as the club’s new performance coach. Whitworth’s role is to introduce the athletes to a more structured performance culture. The Henley-based coach has been warmly welcomed by the club members and has helped the coaches build the 2017/2018 annual training plan using triathlon training software.

Club athletes can now track their training results online after each session and achieve peak performance just prior to key events.

Head coach Michael Warner said: “I am really looking forward to this coming season and to seeing the club grow further.

“We remain at our core an inclusive club. We take on anyone aged 11 to 18 who can swim 400m freestyle, and is keen to train hard to run, swim or cycle faster and compete in triathlon events.”

Anyone interested in joining Tri Henley should email mwarner@trihenley.org or visit www.trihenleyorg.my-free.website/ for further details