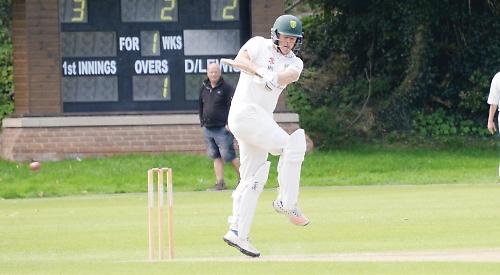 FOLLOWING a brilliant performance defending 231 against TRING PARK, and results going their way elsewhere, HENLEY are champions-elect of the Home Counties Premier Cricket League with two games to spare.

Although the trophy won’t be awarded to Henley until the last game — as with two games left there is technically room for penalty points to be awarded — the league leaders have an unassailable lead of 42 points with only 40 left available for their nearest rivals.

Last Saturday’s victory epitomised a side worthy of champion-status, combining great skill sets and a ‘never give up’ attitude, with a ruthlessness which has provided a number of killer-blows during the course of the season.

Having lost the toss and been asked to bat, Henley got off to an indifferent start, losing captain Michael Roberts early to a loose attempt at a pull-shot which he could only skew straight up in the air.

After his dismissal, Tring continued to use the new ball to good effect, limiting Henley’s scoring opportunities and it wasn’t long before Waqas Hussain played the second loose shot of the day, flicking Alexander Woodland to mid-on for a simple catch to leave the hosts on 33-2.

Surrey’s Euan Woods then joined Matthew Rowe at the crease, and both players consolidated nicely for a period, playing patiently whilst picking off the bad ball. However they were unable to turn their flourishing partnership into something meaningful, as Rowe was bowled by Michael Payne for 18, bringing Middlesex academy player Jack Davies to the crease who along with fellow young-gun Woods, looked to rebuild from 58-3. Although only adding 40 together, the partnership illustrated the quality of youth available to Henley and how both players have developed over the last 12 months. Woods and Davies looked particularly untroubled, with the former perhaps being lulled into a false sense of security with his wicket, essentially missing a straight ball from Charlie MacDonell to be bowled for 33.

However, with the experienced David Barnes joining Davies at the crease, Henley were very much in safe hands. Unfortunately though, and reflecting Henley’s innings in many respects, just as both were beginning to get motoring, a dangerous partnership came to a premature end. This time, Barnes picked out Andrew Dixon at cover off the bowling of MacDonell for 12, and when Stewart Davison and Euan Brock fell in quick succession, Henley were reeling on 166-7.

Once again, it was down to Tahir Afridi to come to the home side’s rescue. Joining Davies, who by this stage had reached a very mature half-century, he rotated the strike masterfully and brought a composure to the innings which had been missing up to this point.

Afridi had also clearly taken some of the pressure off Davies, who was able to score more freely than he had before. Just when a maiden Home Counties century looked to be on the cards, Davies was well caught at long-off by Luke Coleman-Ohrynowsky for a classy 76. His innings was the glue to an otherwise carelessly compiled innings by Henley, and it took Tom Nugent’s ever-improving batting skills and Afridi to muscle two sixes in the last over to ensure the hosts finished on a respectable 231-8 off their allotted 50 overs.

A little under par with the bat, Henley would have wanted a fast start with the ball. Although Nugent was able to trap Liam Gough in front of all three stumps for 8, Tring managed to get on top of the Henley attack.

Both Woodland and MacDonell successfully saw off the new ball, whilst being ruthless against anything loose. At drinks, Tring were on 102-1, firmly in the driving seat and looking relatively untroubled. However, immediately after drinks, Woods picked up Woodland who, in attempt to put the bowler’s delivery onto Remenham Hill, ran out of luck and was eventually stumped by Davison for 51. A few overs later, Brock, replacing Gurveer Singh at the Pavilion End, then accounted for Payne, caught at cover by Woods.

Coleman-Ohrynowsky looked busy at the crease from the start but was pegged back when he lost his partner Woodland, who was bowled by Singh, returning at the Remenham Hill end after a tidy spell by Rowe. Dixon fell immediately in the next over for a duck, caught by Woods off the bowling of Brock, to leave Tring on 133-5.

By the time Coleman-Ohrynowski departed for 29, caught by Nugent off Singh, Tring were 169-6 and requiring a little over six an over for victory.

The introduction of left-hander Sam Rimmington ensured Tring continued to push Henley right to the end. A number of lusty blows towards the allotments and the Little Angel pub put Tring right back in contention but when he eventually departed, bowled by Nugent, Tring were on 196-7 with no batting left.

It was then a matter of time and with Nugent continuing some excellent death bowling, ably supported by Woods at the other end, Tring’s innings came to an abrupt end. Woods accounted for Kamran Shah, before Nugent bowled both Stephen Dutch and Tom Calder to seal the victory.

A strong display in the last quarter of the game from Henley proved the decisive factor – which was facilitated by some excellent bowling and fielding, along with some astute and tactically-proficient captaincy.

Whilst celebrating in the changing rooms, news began to filter through about Finchampstead’s draw at Banbury, leaving Henley in an unassailable position and leading to some mild celebration from the Henley players.