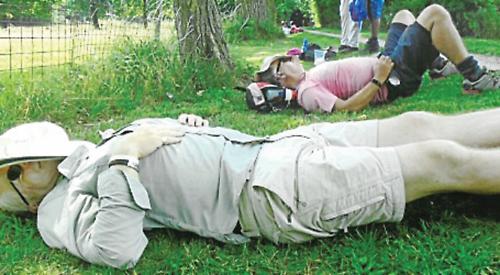 John Green, Stan Ainsley and David Lees were taking part in the Nijmegen Marches in the Netherlands.

They were among about 45,000 people from across the world who joined the annual event.

Mr Green, 82, is chairman of the Henley and Peppard branch of the Royal British Legion, while Mr Ainsley, 60, is a member of the committee and Mr Lees is a branch member.

The trio drove to the Netherlands via Dunkirk and stayed at the family home of Mr Green’s late first wife, who was Dutch, in a town near Nijmegen, close to the start line.

Each day of the walk they started at 6am to ensure they completed 40km by 5pm to qualify for the golden cross medal awarded to everyone who completes the total distance.

Participants can choose a route of 120km, 160km or 200km, which all start and finish in Nijmegen, passing through many villages on the way.

All three routes converge in the final 2km so the walkers finish the day side-by-side.

Mr Green, from Maidensgrove, has now completed the challenge three times. Last year he completed the 200km walk with Mr Ainsley and wanted to return while 60-year-old Mr Lees was a newcomer to the event. Mr Green said: “It is a gruelling event — 25 miles a day in a specified time for four consecutive days, 100 miles in total, and each day involving 55,000 steps.

“Last year I had problems with blisters but I didn’t have that problem this time.

“David suffered more than Stan and me — he doesn’t have walking feet! He had blisters during training and during the walk. He deserves an extra medal for what he did.”

Mr Green, who celebrated his birthday on the second day, said they all enjoyed the challenge.

He said: “At the same time that England was having huge downpours, we had temperatures of between 25C and 30C.

“The enthusiasm of the villages that we went through was even greater than before with bands playing and children lining the route offering refreshments. The presence of military groups all adds to it.

“The thing I enjoyed most was meeting people of all ages and backgrounds.

I got talking to a Dutch lady and her daughter who had rowed in a race at Leander when she was 13.

“I found that if I wanted to be on my own I would sing army songs to myself and the crowds would disappear from around me!”

He added: “At the end of each day you were pleased to put your feet up and go to bed early.”

Mr Green said he would like to take part in the event two more times as he would then be eligible for a “bigger and better” medal. He added: “As chairman of the branch, my main role is to raise money for people who suffer mental or physical problems due to war and I want to keep doing that as long as I have the luck and my fitness.”

Mr Ainsley, who lives in Harpsden, said: “It was a fantastic experience — it has a carnival atmosphere everywhere you go. The weather was kind, except for one bad storm.

“It was tough to do 105 miles over four days but poor old David was in a blister clinic every night and was being patched up.

“We celebrated John’s birthday while we were out there.

“It’s a fantastic achievement and I am pretty sure that we will be back there again next year as it is the 100th anniversary of the end of the First World War.”