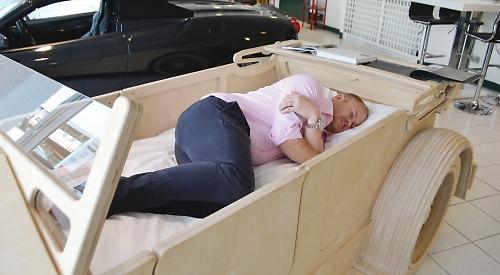 CAR dealer Hofmann’s of Henley has had some unusual luxury vehicles in its showroom over the years but nothing quite like the model currently in the window.

It is a classic 1929 Rolls-Royce Phantom One, Ascot Phaeton edition.

But it isn’t quite what it seems for the “Roller” is not for driving but for sleeping in as it includes a single bed!

The wooden full-scale model costs £22,000, which is good value according to Chris Marriott, sales manager at the Newtown Road dealership.

Chris, 24, spotted the “car” when he visited the Beaulieu Supercar Weekend last month to promote a Lotus GTE Evora that Hofmann’s is selling.

He thought it would look right at home in Henley and says it has already caught the eye of a few customers.

“One gentleman said he would buy it but that his wife would kill him,” he explains. “If it’s going to sell, then it’s going to sell here.” The model was commissioned by the Rolls-Royce Enthusiasts’ Club to celebrate its diamond jubilee this year.

It was designed and built by by Mark Turner and Llinos Mair Pritchard, who own the Fun Furniture Collection of Salford and whose clients include members of royal families in the Middle East.

The pair have previously made beds in the shape of Volkswagen camper vans, Minis, Land Rovers and even a Routemaster bus.

The Rolls-Royce bed, which even has the company’s famous logo, was first displayed at the enthusiasts’ club’s jubilee celebrations at Burghley House in Lincolnshire in June.

The makers produced a design in stages, including the chassis, steering, suspension, wheels, frame and bodywork. Wheel arches, running boards and more bodywork were then added.

The model takes about three hours to take apart and put together again. Most of the pieces slide into place rather than being fixed with glue or screws.

Chris says members of the public are welcome to visit the showroom to see the piece, which should be there until the end of this month unless it is sold.

He adds: “It’s in the right place because we sell Rolls-Royce, Bentley, Lotus and Porsche. The person who is going to buy the bed would buy a car from here.”

Incidentally, the Evora is one of only 20 that were made roadworthy and costs £112,000. It doesn’t come with a bed.