Juniors pick up awards at end of encouraging campaign 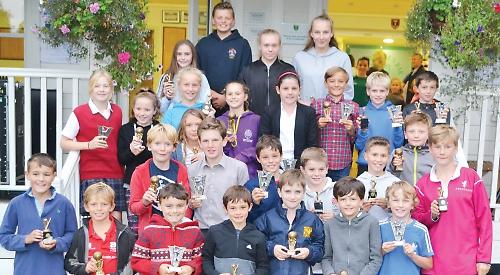 More than 40 prizes were handed out to the top players on Thursday of last week by first team members Tom Nugent and Richard Morris.

There were bowling, batting and most improved player awards for each age group, ranging from U9s to U16s.

More than 200 youngsters play for the club’s eight boys’ teams and four girls’ teams, while 40 others are part of the U8 development squad.

Among the top performing teams this year were the U11 Cougars, the U13 Cheetahs and theU15 team who all made it to the Berkshire Youth Cricket League regional semi-finals.

The U15s beat Maidenhead and Bray in their semi-final and have a chance to take the title this Sunday.

For the first time this year a chairman’s award was presented for outstanding achievement.

It was given to current U15 team manager Andy Jordan for his service to the junior section, where he has led several of the club’s teams.

Chairman Brian Kenworthy said: “The junior section develops two parts of our core strategy for cricket. It encourages wider participation and it provides a pathway from junior to senior cricket.

“I want to thank the junior committee, the coaches and the parents for helping to make the season the success it was.” Junior chairman Paul Smith said: “It was the celebration of the end of an excellent year of work by all involved.

“It’s great to be able to recognise some of the excellent work the youngsters have done in improving their game. We all cast our minds back to being kids, and having a bit of recognition is massively important to self-pride and being able to feel you have made some headway and achievement in something outside of school. Winning is one thing but participation is a very important part of what we’re trying to do here. I want as many kids in and around Henley trying cricket and loving cricket. We have had massive interest in girls’ cricket in Henley and that section goes from strength-to-strength. Henley’s current first 11 has got several members who came up through the junior section and we want to be able to carry that on.”