Have we got mews for you 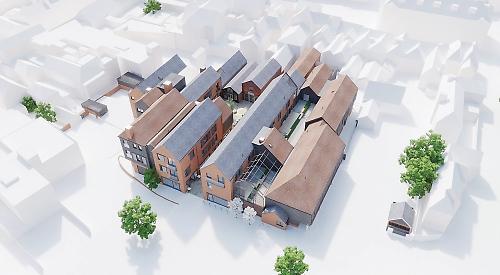 THIS is the first glimpse of a multi-million pound redevelopment in the centre of Henley.

Work has finally begun on transforming Market Place Mews to create 14 flats and nine shops and a restaurant following years of delays.

The 16,000 sq ft scheme will be called Gardiner Place after Captain Edmund Gardiner, who first had the idea that Henley should hold an annual regatta.

It will have landscaped courtyard gardens and a public open space in the centre.

The design was created by London architect ColladoCollins on behalf of Catalyst Capital, a real estate investment group which has owned the site for just two years. Work is not scheduled to be completed until the summer of 2019.

Ilan Goldman, the company’s European director, said: “We are delighted to begin the archaeological works in Henley. Gardiner Place will transform the current site and the scheme will reflect the character of the town while providing an attractive living and leisure offer.

“We hope it will also increase economic and social opportunities and make the town even more of a desirable area to live, shop and eat.” The company says the development will “complement” the town’s architecture and will be Henley’s only fully pedestrianised shopping street and public square.

“We are all working closely to make sure that the disruption to Henley’s visitors is kept to a minimum during the building work.”

Henley Mayor Kellie Hinton, said: “I’m excited by anything that can make the town centre better and contribute to the economic development of Henley.

“We have tried to make Henley a winter destination and a project like this is something to draw people to Henley all-year round. I hope it’s completed by 2019. It’s a huge development and that seems an incredibly long time, especially for the town centre. It is good that it is finally moving ahead and there seems to be some momentum.”

The King’s Road car park will be temporarily reconfigured during the construction with the southern entrance being used as an exit only. Vehicles will still be able to enter and exit the car park at the northern entrance by the library.

A small number of spaces at the southern end of the car park will be temporarily out of use to allow all traffic and deliveries to enter and leave the site safely.

The company says the changes will be displayed on notices around the site. Market Place Mews will be temporarily closed to the public from next month and the company says other routes through to the King’s Road car park and Waitrose will be clearly displayed.

Planning permission for the redevelopment was granted in 2007, when the site was owned by the DeStefano Property Group but the project repeatedly stalled before the company went into administration. The mews was bought by Catalyst Capital in 2015 as part of a £55million deal for 19 former DeStefano properties across the South.

In recent months several businesses have been forced to close or move as a result of the imminent redevelopment. Florist Stemtation left the mews in January last year with the owners saying that footfall had fallen and the future of their rented premises was uncertain. The business now trades online.

Antiques and homeware shop Vintage Look moved from the back of the mews last summer to the former Spirited Wines premises in Market Place.

However, after just three weeks it was told to move by Catalyst Capital. The shop then re-opened a few weeks later in Hart Street.

A year ago Louise Claire Millinery moved out of its unit in Market Place after 15 months due to the “uncertainty” over the redevelopment.