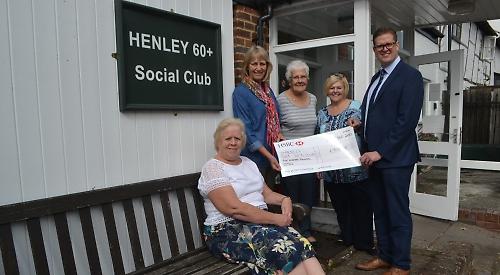 THE founder of a care business has donated £500 to the Henley 60+Social Club after reading about its deficit in the Henley Standard.

Robert Mezo, who runs Bluebird Care, presented a cheque to Gill Dodds, chairwoman of the management committee, during a visit to the club in Greys Road car park.

Mr Mezo, whose business is based in Wallingford but provides carers across South Oxfordshire, said he wanted to help after reading our report that the club had a £5,000 shortfall in its budget this year. He said: “I appreciate how valuable this club is in Henley and the surrounding community.

“It has a beautiful building in a great location for many people to use it.”

The club has also received a donation of £10,000 from Ann Manning, who runs the insurance brokers of the same name and £2,000 from funeral directors Tomalin & Sons, both in Reading Road.

Mrs Dodds added: “A huge thank-you to Robert. Following the article in the Henley Standard we’ve been thrilled at the support from the community, for the club and members. Henley is very lucky to have a facility like this.”

The club was founded in 1971 and has more than 100 members who each pay a membership fee of £15 a year. It opens every weekday from 10am to 4pm and holds activities such as bingo and computer lessons and arranges outings.

The town council owns the building and pays an annual grant of £10,000 towards its running costs while investment income brings in about £10,000.