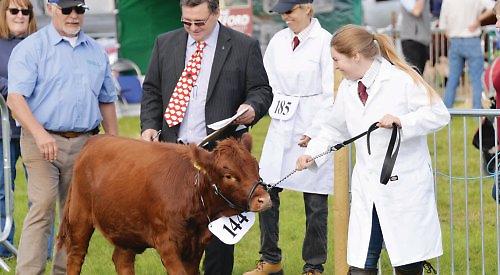 Thousands of people attended the 126th annual event, which took place at the Greenlands Farm showground, off Marlow Road, on Saturday.

Conditions were significantly better than last year, when the show suffered a non-stop deluge of rain and attendance was among the worst on record.

The Henley and District Agricultural Society, which runs the show, experienced a deficit of £9,000 as a result.

On Saturday, the sun was out when the gates opened at 8.30am and it continued to shine until a brief but intense hailstorm struck at about 3pm, prompting guests to run for shelter beneath marquees.

There were a few more light showers, which turned the ground boggy under foot, before the end.

The beef champion was Calverton Maria, a Limousin heifer owned by Richard and Judy Fountaine, from Beachampton in Bedfordshire.

Other competitors included show regular David Hicks, of Kingwood Farm, Wyfold, whose rams Bruce and Brian came first and second in their class respectively, while his British Blue and Limousin cross Buggalugs came third in the commercial butchers heifer category. Three of his other Limousin crosses came fourth, fifth and sixth in their class.

Mr Hicks’s son James, 18, who handled the animals on the day, said: “I think we did pretty well. There was a high turnout this year and some very strong competition so we’re very pleased with the result.

“We’ve had a nice afternoon. It would have been better if the weather had stayed dry for a bit longer but this is always one of our favourite one-day shows and a good way to end the season.”

Another returning regular was Tim Saint, from Playhatch, who won the pumpkin category with a 371lb specimen. He also took a first prize with his 58lb cabbage and a second with a 42in marrow.

His entries drew a large crowd in the produce tent and many visitors stopped to take photos of them, congratulate Mr Saint and ask him for advice on growing their own vegetables.

Mr Saint, who has been competing for more than a decade, said: “Conditions have been fairly good for growing and I think the results reflect that.

“I’ve got an even bigger pumpkin growing back at home for the Malvern Autumn Show at the end of the month. It has got to weigh more than 500lb. The pumpkins are always fantastic decorations for Halloween, although it takes the best part of a day to hollow them out.

“When we’ve finished they’re big enough for my little niece to climb inside, which she always enjoys!”

A 90-year-old man from Medmenham was named runner-up in the the landscape category of the art section with a pastel painting of the mountains of Rum in the Inner Hebrides.

Howard Webber, who attended with his daughter Susanne Birkett, was entering the show for the second year running.

He said: “It’s very rewarding to win at my age. I’ve done a fair bit of art all my life, mostly in oils and watercolours — it’s all at a fairly amateur level but I enjoy it.”

The show featured demonstrations of a range of rural pursuits. Farmer Warren Calitz, who is originally from South Africa, showed how to shear a sheep and talked about the wool industry before making his flock “dance” to disco music by bobbing their heads and kicking their legs.

Graham Watkins, from Oxford, staged hunting dog displays in which he showcased the skills of different breeds, including a Hungarian Vizsla, which he led using a chicken feather on a length of string and trained to freeze “on point” for several minutes at a time.

Other attractions included vintage and classic car and tractor displays, live music and a series of arenas featuring showjumping, pony and cart races, a companion dog show and more.

There was also a fairground with a carousel, bungee trampoline, Punch and Judy show, zorbing, swing boats, a helter skelter and a bouncy castle.

A new event in the main arena was scurry racing in which a pair of ponies pull a carriage with two riders around a series of cones at speed. Because the ground was wet, competitors became caked in mud which sprayed up as they weaved around corners.

Other attractions included a shopping arcade and food and wine tent selling goods by local producers, a beer tent and an exhibition on food and farming and a wooden cow called Delilah with a realistic udder which children could “milk”.

The Henley Young Farmers Club ran a fund-raising stall for the Thames Valley Air Ambulance. Visitors could take part in a lucky dip for prizes or try to guess the number of balloons packed inside an earth digger.

Laura Gascoyne, one of the members, said: “It was better than last year because the ground was a lot drier and we raised more than £100.

“We had quite a few people sign up for more information so hopefully we’ll get a few new members too.”

There was a horticultural tent featuring displays of bonsai trees by the Berkshire Bonsai Society and floral displays by the organisers of the Chelsea Fringe Festival, which takes place in and around Henley.

Town councillor Stefan Gawrysiak, who ran the tent, said: “We’ve put on a wonderful display and I’m so pleased with the weather because last year we were absolutely soaked and miserable from first thing in the morning until the evening.

“The hailstorm was a bit interesting but overall it has been much more pleasant and we’ve been hugely successful. Lots of people have come out to support us and everyone seems to be really enjoying themselves.”

Henley Mayor Kellie Hinton, a friend of show manager Jo Taylor, worked all day as a volunteer in the secretary’s tent after one of the regular helpers dropped out. She was handing out radios to the rest of the team and answering visitors’ and competitors’ queries.

During the lunchtime break, she put on her mayoral chain and attended a drinks reception in the members’ area with the Earl of Macclesfield, who took over from Richard Ovey as the show’s president in March, and Henley MP John Howell. Henley town councillor David Eggleton, her consort, accompanied the Mayor. Afterwards, she walked around the site for about an hour greeting visitors.

Councillor Hinton said: “I love the show as I am Henley born and bred and have been almost every year of my life.

“It was an exhausting experience but I really enjoyed it and didn’t even find the weather inconvenient. I don’t think the hail and rain bothered many people because there were plenty of tents so they were able to shelter.

“I enjoyed my walkabout because throughout my year as Mayor I want to be as accessible as I can. I spoke to a lot of people and they all said they were really enjoying themselves.

“Although I put a lot of hours in, it didn’t feel like hard work at all and I was just glad to be able to help.

“ Jo and her team put in an enormous amount of effort to run this show for the community and they deserve as much as support as possible.”

Show chairman Andrew Ingram, who runs the Tree Barn in Christmas Common, said: “It went very well. Rain was being predicted after lunchtime, which is exactly what happened, but the morning was beautiful and it brought lots of people out. I don’t think they were too worried by the forecasts.

“As usual, there was lots going on and we’ve received a lot of positive feedback. There’s always plenty to do — I would defy anyone not to find at least two or three hours’ worth of activities they’ll enjoy, whether it’s looking at the entries in the produce section, watching the action in the arenas or grinding wheat and doing quizzes on farming.

“The scurry racing was extremely well received but we’re not complacent and will try to come up with some even more eye-catching ideas next year.

“The public love these competitive pursuits and it was exciting to watch these riders going hell for leather despite the rain and mud.

“Last year’s weather was an absolute shocker but early indications from our treasurer suggest we’ve done much better this time. Having previously experienced a total washout, there was a shared feeling of immense relief that the sun was shining when we woke up.

“Our president did a fantastic job of giving out the prizes in the main arena during the grand parade. The heavens opened and he got absolutely soaked from head to toe but he stuck it out.”

Mr Ingram, who was previously chairman from 1990 until 2001, stepped back into the role on a three-year basis in 2015 but he said: “I strongly suspect that I’ll still be around next year.

“I really enjoy it because we have a superb committee and an excellent show manager in Jo Taylor. She’s one of only two professionals who run it, alongside our showground contractor John Williams. Everyone else is a volunteer and they freely give an extraordinary amount of their time.”