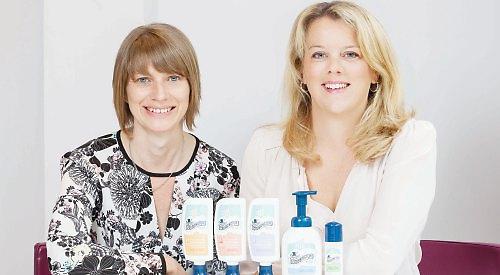 EMMA CRANSTOUN was bathing her two young children when she came up with the idea that has attracted one of the biggest retailers on the high street.

She was using baby shampoo to clean her son Max and daughter Leila yet neither was a baby.

Mrs Cranstoun asked herself why she was bothering to wash the children when they could do it themselves — all they needed was their own toiletries.

And this is what led to the Professor Scrubbington’s range of children’s toiletries that has just gone on sale in 400 Boots stores nationwide.

Mrs Cranstoun, 41, of Western Road, Henley, is one half of the team behind the five natural products, which include a hair and body wash, bubble bath, hand and face wash, a shampoo and conditioner and a deodorant.

The other half is Karen Waring, from Marlow, who also has two children and used to be a colleague at a London design agency.

It was more than three years ago that Mrs Cranstoun made her discovery while bathing Max, now 10, and Leila, eight, her children by husband Mark, 46.

She recalled: “I was washing my kids in the bath when two things struck me — the product I was using had a baby on the bottle yet neither of my children was a baby and why was I washing them when they could be doing it themselves?

“I spoke with other mums and kids and then went into the supermarkets to see what else was out there.”

Mrs Cranstoun, who runs a marketing consultancy, then carried out more research and was surprised to find there was nothing already on the market, so decided to produce her own formula with Mrs Waring.

She said: “We found a manufacturer in Leeds and they recommended to us an independent chemist, who helped us to produce the formula.

“We gave her a brief and were very clear on what we wanted. It needed to be as natural as it could be but it had to foam too so it stuck to your hands rather than be lost down the plughole.

“We looked at other products, which was helpful as we then saw exactly what we didn’t want. A lot of them are full of chemicals and are strong smelling or quite floral but we wanted something that was gender neutral.

“The chemist would make the stuff in her lab and send it to us through the post and we would then send it back and forth to get it how we wanted it.

“We would go back and say things like ‘the formula is not bubbly enough’ or ‘the scent isn’t strong enough’ and she would make the changes. It probably took about 12 weeks to get the finished formula.”

The Professor Scrubbington’s range uses 98 per cent natural ingredients, including aloe vera, a naturally gentle moisturiser, with no parabens, colourants or sodium laureth sulfate. Each product comes in bottle, which is designed to fit in a child’s hand and is easy to squeeze,

Mrs Cranstoun said: “While other products also have foam as a bubble bath, the chemical that is used is not natural. Indeed, if parents actually knew what it was they probably wouldn’t use it on their children. What we use to create the foam is a natural alternative.”

The women “pulled in some favours” at a London design agency to help with the packaging of their product, which they wanted to include the word “Scrubs”.

Mrs Cranstoun said: “We told them it had to appeal to children but not to be so crazy that parents wouldn’t want to have it in their bathroom. The design was to be children first but trying to treat them as a bit more grown-up.

“There is a lot on the market which is either pink or blue, pirates or princesses. Having spoken to a lot of children, I know they don’t want that. They are a bit savvier than they are sometimes given credit for.”

The women sent samples to all the major supermarkets and department stores but the feedback was mixed.

Mrs Cranstoun said: “They wanted us to make the colours brighter and make it clearer that it had 98 per cent natural ingredients.

“We did that and then we would keep hounding them all by email until they responded. Retailers are very hard to deal with, so we knew we had to build success with sales. We were listed very quickly on Not on the High Street so we were able to say this when we pitched elsewhere.”

Finally, at the end of last year, Professor Scrubbington’s went on sale at 20 Waitrose stores as a trial.

Mrs Cranstoun said: “I think they saw the potential in the product as they agreed with us that there wasn’t enough choice for children and at that time they were trialling more products to expand their health and beauty section.

“With Waitrose on board, it was enough for us to then be taken seriously. We are now waiting to see whether we will be rolled out into more of their stores.”

In April, the products were listed on Ocado, the online home delivery service, and then Boots agreed a deal. Each one is priced at £3.99.

The women have outsourced the manufacturing, which amounts to about 16,500 products a month, and the business is in profit.

In the meantime, Professor Scrubbington’s has received two bronzes in the Green Parent Natural Beauty Awards and Junior Design Awards and were finalists in the Made for Mums Awards.

Mrs Cranstoun said they were now in talks with Sainsbury’s and Tesco and hoped to attract investment so they can expand and export.

She added: “I can’t believe such success can come from bathing the kids!”