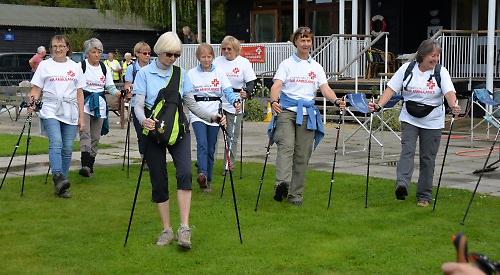 A CHARITY trek through the countryside around Henley raised more than £1,500 for the Thames Valley Air Ambulance service.

Twenty-two members of A Foot In The Chilterns, a Nordic walking group led by Henley resident Anthea Osborn-Jones, walked a circular route of either five or 10 miles from Upper Thames Rowing Club near Remenham on Saturday last week.

They set off after a short warm-up led by Mrs Osborn-Jones and Bridget Smith, who has just qualified as a Nordic walking instructor, and were marshalled by a team of eight volunteers. Those taking part in the long walk headed downstream towards Temple Island and enjoyed a picnic on a field belonging to the Culden Faw estate.

They then crossed the River Thames at Hambleden Lock and walked to Hambleden before returning along the opposite river bank, passing Fawley Court and Phyllis Court Club.

The other group followed a circuit which went up White Hill and turned off towards Aston, where they stopped at the Flower Pot for refreshments then walked back to the rowing club. Both parties walked with special poles which reduce the strain on knees and joints and give walkers’ arms a workout as well as their legs. They were greeted at the finish by Ruth Dunkin, a fund-raiser for the air ambulance service, and given refreshments before going home.

Mrs Osborn-Jones, of Norman Avenue, came up with the idea as she had to call out an air ambulance while walking with the group in the Lake District last year.

She said: “I’m very pleased with how it went as we exceeded our target and the money is still coming in. We were very lucky with the weather and everyone I’ve spoken to says they really enjoyed it. One of our members said it was the furthest she’d ever walked before.

“It was really nice to sit down afterwards and just watch the river as the sun went down. We’re really grateful to everyone who helped us.”

Mrs Osborn-Jones added: “Air ambulance services are incredibly important because they can get to the scene of an emergency quickly, which makes a big difference and is very reassuring for anyone who finds themselves in trouble.”

To sponsor the group, visit www.justgiving.com/afootinthechilterns