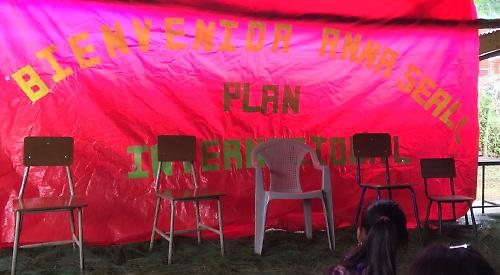 A TEACHER from Henley flew out to Guatemala to meet a teenage girl she has been sponsoring for the past 12 years.

Judy Seall and her daughter Anna, 16, spent an afternoon in the youngster’s village and took part in a civic service at her school, which has recently added a new classroom thanks to the pair’s support.

They give a monthly donation of £19.50 to the 15-year-old, whose name is Ana-Floricelda, through the charity Plan International and have raised funds through sponsored events like cycling challenges.

The money does not go directly to Ana-Floricelda but is put towards good causes in her community so that her family and neighbours also benefit. It has paid for a scholarship so that she can stay in school as many of her classmates must leave to start work when they are 11.

Ms Seall, who is head of drama at the Dolphin School in Hurst, has carried out charity work in various countries since the Eighties and first visited Guatemala during the closing years of its 36-year civil war.

She fell in love with the central American country and decided to adopt Anna, who has lived with her ever since. The pair recently moved to Henley from Holyport, where Anna still attends college.

They began sponsoring Ana-Floricelda after Ms Seall found out about Plan International while working for Unicef’s education department in 2005. They have visited her twice before, once in 2010 and again in 2012. On their latest visit to her village, which is a seven-hour drive from the capital Guatemala City and has a population of several hundred, they met her at her home and gave her some clothes before sitting down to share news about their lives.

They then watched performances by pupils at Ana-Floricelda’s school and sang the Guatemalan national anthem before Ms Seall taught the children the English greeting song How do you do?

Ms Seall and Anna then spent three weeks carrying out community work elsewhere in the country before returning home.

Ms Seall said: “It was interesting to see some of the changes since our last visit as the roads were more even and they now have electricity, so they’re slowly making improvements. Ana-Floricelda’s home was beautifully decorated with pine needles on the floor and all the cards we’d sent over the years were out on display along with a sign welcoming us.

“We attended a ceremony and they’d put up a large pink sign saying ‘Bienvenida Anna Seall’, or ‘Welcome Anna Seall’, which my daughter was a bit self-conscious about but also really thrilled. I felt honoured and humbled by the warm reception they gave us.

“I think it’s important to help other people, whether they’re in other countries or your own, and I like Plan because they make sure the whole community benefits so the person you’re sponsoring doesn’t feel singled out or envied.”