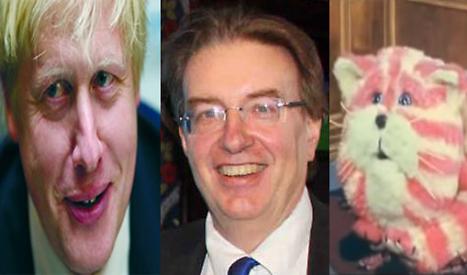 WHO has been Henley’s most popular MP — Boris Johnson or his successor John Howell?

That’s a question that some constituents have been asking themselves this week after a debate inadvertently sparked by the Foreign Secretary’s input on Britain’s Brexit negotiations.

“Bo Jo” hit the headlines after setting out new demands for a swift departure from the European Union, saying the post-Brexit transition should last “not a second longer” than two years.

This led to calls by some critics that he should be sacked by Prime Minister Theresa May as many saw this as an attempt to manoeuvre himself into position as the next Conservative leader and PM — and possibly sooner rather than later.

Mr Howell, who was a Remain supporter in the build-up to the EU referendum last year, said what he thought of his predecessor’s intervention while at the Tory party conference in Manchester this week.

He said: “My message to Boris is to keep his bloody mouth shut!”

The BBC’s political editor Laura Kuenssberg tweeted on Monday that Mr Howell had said Mr Johnson’s former constituents thought he should be sacked.

This sparked a debate on social media with some agreeing and others rounding on Mr Howell.

Karen Mellors said: “Not just his constituents, but the majority of UK think he [Johnson] should be sacked.”

Howard Sprenger wrote: “I’m amazed that anyone with a brain cell can consider him fit for any job, let alone a government minister.”

Michael Smith called Mr Johnson an “embarrassment” to the country and said he was a “thorn in the side of the Government”.

Simon Saunders said: “Johnson’s trying to get sacked on purpose in the hope it’ll split the cabinet and force May out.”

But Henley town councillor Ian Reissmann, a member of Henley Residents’ Group and no fan of the Conservatives, said: “Actually most Henley Tories want Boris back as Henley MP — admittedly because his replacement is useless and despised.”

Connor Wakefield‏ agreed, saying: “To be fair, as one of his constituents, I think John Howell should be sacked.”

“The Grim Squeaker” responded: “I’d rather have Bagpuss than either of them!”

For the record, Mr Howell wins hands down when it comes to majorities at elections.

Of course, there will be some readers who may have preferred Boris’s predecessor Michael (now Lord) Heseltine, another Conservative who fell out of favour after challenging his and the first female PM, Margaret Thatcher.

Plus ça change, as they say in Europe!

⚫ Did you hear the news this week that the estimated average age of a Conservative Party member is now, wait for it, 72?