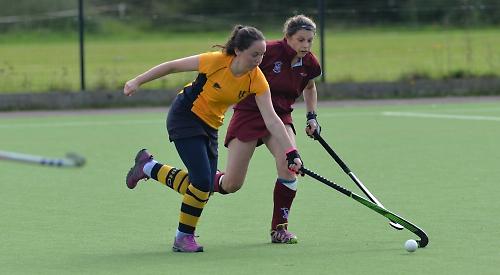 HENLEY Ladies won their first Division 3A match of the season last Saturday as they defeated visitors Milton Keynes 3-0 at Jubilee Park.

The hosts got off to a good start as they played a high tempo for the game. The amber and blues took the lead when Jemma Barham’s skilful play saw her go past the Milton Keynes defenders down the left hand side and working with Sophie Hoskins tightly, they soon found captain Georgie Metcalfe who fired home.

A couple of chances later Henley were awarded a short corner which saw Rachel Herbert’s powerful strike saved by the keeper but Metcalfe once again got her stick on the rebound to put Henley 2-0 up.

In the second half Milton Keynes played a tight defensive pressing game making it harder for Henley to drive forward. However, the Henley players were pushing themselves to keep the high tempo with Kiera Halloran and Taminah Brown’s baseline runs pulling apart the Milton Keynes defence.

Henley were back in full force accelerating forward and after a few missed chances the hosts were awarded a short corner which was perfectly executed and Herbert took a clean strike to find the back board.

Against the run of play Milton Keynes made some fast breaks from their defence but Henley kept their composure to keep the score 3-0 at full time.

• Henley are holding a club day tomorrow with five home matches taking place at Jubilee Park. A barbecue, cake sale and bar will be open for supporters.