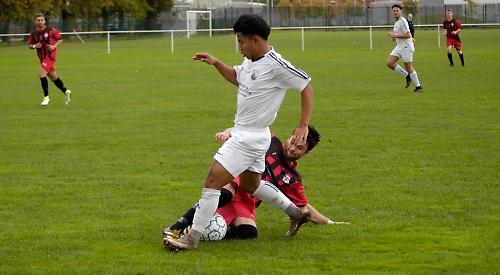 HENLEY TOWN were unfortunate not to have taken a point at the Triangle ground on Tuesday evening against neighbours Wallingford Town AFC in the Uhlsport Hellenic League Division 1 East encounter.

The game was end to end with both sides giving little away. The visitors were fortunate to take the lead in the 29th minute when a Henley clearance ricocheted of a team mate and fell to Euan Aitchison to drive the ball past Cosmin Mariah in the Henley goal.

Henley attacked and Karol Derewenko had a fierce shot well saved by the visitors keeper Liam Vaughan before the same player headed just wide from the resultant corner.

After the break the game was similar with both sides thwarting each other’s attacks. Henley tried hard to level the scores with Ryan Szram having an effort saved by Vaughan and Karol Derewenko shot wide from an good position.

In the 85th minute Wallingford’s Max Mohan-Triggle was shown a red card after an illegal challenge on Rupen Limbu but Henley couldn’t take advantage of the opposition’s reduced numbers.

For the independent observer it was difficult to see that Wallingford are 10 places above a Henley side that has vastly improved in recent weeks but they lack a regular goalscorer.

Manager Jock Mowat and assistant Chris Abbott seem to have steadied the defence with the signing of central defenders Blakebrough from Woodley United and loan signing Jack Byerley from Northern League club Whitley Bay and with the addition of a good striker the Red Kites should start moving up the league.

The defeat came just four days after the Red Kites had knocked Aldermaston out of the Floodlit Cup following a penalty shootout.

The only goal of the match came after 10 minutes when a goalmouth scramble was put away by Liam Tackley. The home side had the better of the play but were unable to find a way past the Henley back four of Harry Campbell, captain Luke Blakebrough, Will Jaycock and Graham High and goalkeeper Adrian Cosman.

Henley did create several chances with Chris Hood and Rupen Limbu going closest for the visitors.