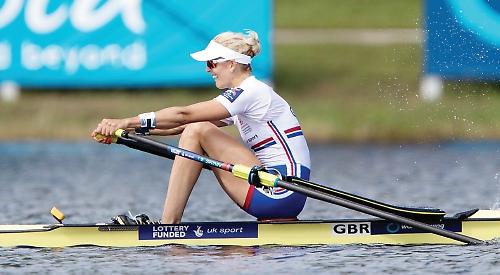 SENSATIONAL performances from Leander scullers Tom Barras and Vicky Thornley saw them spearhead a clutch of medals for Great Britain at the world championships in Florida.

Silver for Olympian Thornley in the women’s single sculls was the climax of the season for the European champion, while bronze for Barras in the men’s event put him firmly among the world’s elite after his first year as a senior.

Great Britain’s success in Florida kicked off with silver for Leander’s Ed Fisher in the lightweight men’s quad, where he raced with Edinburgh University’s Gavin Horsburgh, Peter Chambers of Oxford Brookes, and Zak Lee-Green of Agecroft. The crew were edged on the line by France, who clinched gold by just 0.17 seconds with Greece back in third.

Paralympic champion James Fox went on to his fourth world title in the mixed coxed fours in winning GB’s only gold medal of the regatta. The four, which included Molesey’s Oliver Stanhope, Grace Clough of Nottingham, Giedre Rakauskaite of Worcester, and their Molesey cox Anna Corderoy, crossed the line 23 seconds clear and broke their own world’s best time in the process.

Then followed intense drama as a late change in the all-Leander GB men’s quad saw Agecroft’s Graeme Thomas coming in to stroke the boat for an injured Pete Lambert. The crew, which included John Collins, Jonny Walton and Jack Beaumont, had been hotly tipped for gold but, despite the substitution, they finished behind Lithuania.

Speaking after the race Collins said: “We came here knowing we could win gold so there is some disappointment but mainly we’re delighted to win a medal Luckily we’ve got the strongest spare in the world in Graeme and we couldn’t have asked for more of him.” There was another surprise when the GB men’s four, coached by Jurgen Grobler and with Olympic champions Will Satch and Moe Sbihi on board, finished third in their final behind Australia and Italy. The young women’s quad of Leander’s Beth Bryan, Holly Nixon and Jess Leyden, with Mathilda Hodgkins-Byrne of Reading, were also on the podium with a bronze medal. The Netherlands and Poland took gold and silver but an excellent second half from the British crew took bronze ahead of Germany and the USA.

After picking up her medal Bryan said: “I knew that if we stayed focused we would come through as we practise that last 750m and it worked for us in the heat.” But it was the final day of racing last Sunday that provided the climax to the regatta as Thornley and Barras both finished on the podium. In the women’s singles the 29-year-old former equestrian finished behind Jeannie Gmelin of Switzerland, who won the gold, with Magdalena Lobnig of Austria in bronze.

Speaking after the race Thornley said: “I’m really happy with that. If you’d have said at the start of the season that I would come away from the Worlds with a silver medal I would have taken it. This is right up there for me and after the Olympics this is my best result.”

Next up was Barras, who beat the 2017 World Cup winner Robbie Manson and the Rio Olympic silver medallist Damir Martin to claim bronze behind Ondrej Synek of the Czech Republic and Cuba’s Angel Fournier Rodriguez.

Barras said: “It’s just absolutely incredible. I never believed any of this was possible before the regatta started.

“The guys out there are incredible, they’re like gladiators, so to be mixing it with them in my first season here is an amazing achievement. Hopefully with Jurgen’s programme I can carry on improving and be right in the mix in 2020.”

Despite having won a total of seven medals, the second highest among the competing nations, Great Britain’s single gold meant finishing eighth in the medal table behind league leaders Italy.