Presenter knows good thing when he sees it! 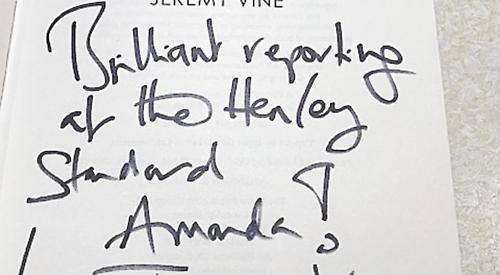 THE Henley Standard has a celebrity fan in Jeremy Vine.

The broadcaster and journalist signed a copy of his book What I Learnt for Amanda Stewart, who works in advertising sales at the paper, after his appearance at the Kenton Theatre on Thursday night.

Amanda, who lives in Woodcote, said: “Before I came here I was a news reporter for 18 years and I found him fascinating. I picked up my copy of the book and he was very interested in where I worked.

“We talked about the Henley Standard  and he said ‘is there much news in Henley?’ and I said ‘we rather like it because it means there’s low crime’.

“He said ‘you do have some planning issues though, don’t you?’

“He said that when he went on his first assignment he was sent to interview four students at a hospital and they were dressed as bears and he asked them ‘how old are you and what are you doing here?’

“When he got back to the office, his editor said ‘why were they dressed as bears?’ and he said he didn’t know and was sent back to find out!”

⚫ This item has nothing to do with the fact that Jeremy and the Henley Standard editor both trained to be journalists at the evening paper in Coventry in the Eighties (although not at the same time)!