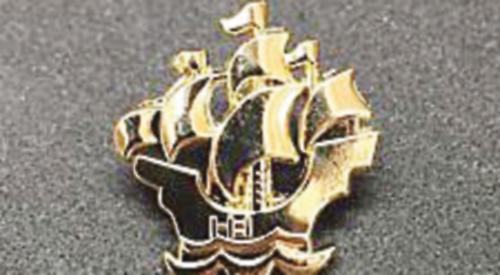 MARY BERRY was surprised on stage by a television crew during her sold-out talk at the Henley Literary Festival.

She was then presented with a Blue Peter gold badge for encouraging people to make and bake.

It came at the end of an hour-long interview with the cook and food writer by television presenter Emma Freud.

Before introducing Berry, who has a home in Henley, festival founder Sue Ryan said the event was the “hottest ticket” at this year’s week-long festival, which ended on Sunday.

On Friday evening, the ballroom at Phyllis Court Club was packed with 310 people, all of whom received a signed copy of Berry’s new book Mary’s Household Tips & Tricks. After the interview and questions from the audience, Freud introduced the Blue Peter crew from behind a screen.

Lindsey Russell, a presenter on the children’s show, told Berry: “The essence of Blue Peter is making and baking, that is what so many generations have learned from you, so we are here to present you with a Blue Peter gold badge.”

She then unveiled the gold-plated brooch in the shape of the programme’s ship emblem. The gold badge is the show’s highest possible honour and is awarded for exceptional achievement by children or to adults who are seen as role models who inspire the nation’s younger generation.

Berry, who was cheered and applauded as she received the accolade, said her children had been brought up on the programme. “I am honoured,” she said. “I had no idea — I hope there are no more surprises.”

Berry, who was wearing a sparkling, silver lamé dress that prompted Freud to suggest she was going to a nightclub afterwards, had earlier talked about her life.

Freud showed the audience a series of pictures, including one taken by Berry’s father Alleyne that won a Daily Mirror competition in 1938. It shows Berry and her brother Roger using their mother Margaret as a makeshift balance for their seesaw on a beach in Weston-super-Mare.

Berry, 82, said: “Dad was a very keen photographer. He won £100, which was an awful lot of money and it almost changed my parents’ life. I have the picture hanging in my kitchen with the piece from the paper.”

She also spoke about contracting polio when she was 13. “I remember it really well,” she said. “I knew I was ill because there was a fire in my bedroom, which had been lit, but my mum lit it and sat there with me through the night. I saw my doctor, Dr Love, and he said I had better go to the isolation hospital.”

Berry was later moved to an orthopaedic hospital, where she shared a ward with tuberculosis patients. She said it was incredibly cold as the windows were left open to give them fresh air.

During her stay her father brought her pony, Kerry Lass, to visit her. She said: “Can you imagine it now? It would not be allowed.”

Berry spoke about her career and how she came to be involved with The Great British Bake Off in 2009.

“I felt I could not make a decision on my own,” she said. “I said, ‘I am rubbish at bread’, so they brought in four bakers and they asked me who I liked. I said ‘it’s not about who I like, it’s who you think goes well with me’, so I got Paul Hollywood. I respected him and I think he respected me. With Mel [Giedroyc] and Sue [Perkins] there was never a moment it was not fun.”

Berry said she would often carry a hot water bottle around during filming in the marquee to keep warm and then hand it to the production crew when the cameras were rolling.

She decided to quit when the show moved to Channel 4 for the eighth series, which is currently being screened.

Berry said: “For me it was a BBC programme. I felt my loyalty lay with the BBC. Mel, Sue and I were altogether and said, ‘no, we shall not stay on the show’. I felt it was the right thing to do. The bakers are the stars.”

Berry, who is currently renovating the house in Fair Mile that she bought earlier this year, told the audience that she had been invited to Buckingham Palace for afternoon tea with the Queen and Duke of Edinburgh and was one of just 12 guests.

To help prepare for the occasion, she visited John Lewis with a personal shopper to choose her outfit.

“I was helped by a lovely young girl called Victoria,” she said. “I rang beforehand and told them the sort of thing I wanted. She showed me a lot of things. The dress I chose cost £36 and was down from more than £100 — I love a bargain!”

Berry sat next to the Duke of Edinburgh and opposite the Queen. She said: “It was lovely and I have no idea what the food was — I was too busy looking at everybody.

“The corgis were running about during lunch. Eventually, at the end of the meal, someone came up with a little silver plate, they lifted the lid and the dogs were given a little something while the Queen was talking.”