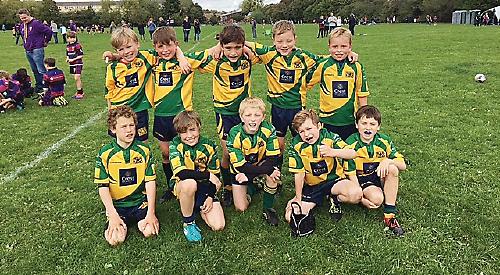 HENLEY U10s entered two teams into the Maidenhead tournament on Sunday and built on the performances from the previous week with rucking and tackling improving dramatically.

The team gelled quickly for the opening match against old foes in Windsor and put in a physical display with good running from Luca Coleman, George Bottomley and Henry French. Coleman showed his skill in distribution and also stepped a number of defenders, while Bottomley and French performed well. Charlie Martin displayed some great poaching skills in stealing many of the opposition ball at ruck time and tackled well while Seb Phillis showed good all-round skills, by running from deep at pace and scoring some good tries.

A long break of an hour and 20 minutes between games ensued and after three straight wins the team were up against a physical team in Maidenhead 2.

Henley went ahead early through Seb Phillis but let Maidenhead back in by not spreading their defence wide enough so were outflanked as the match finished 4-4 although an injury to Felix Baker in the first minute hampered Henley throughout the rest of the tournament.

The final match saw another game against Maidenhead 1 and Henley by this stage were tired. Whilst in the game at half-time some weak defence allowed Maidenhead to dominate the last quarter and run out winners.

In pool two Henley 2nds ran in 27 tries over the course of five matches as all the squad played their part in an undefeated day.

There were many standout performances spread across the day with Felix Cooper scoring a hat-trick with the second of his tries following a flowing run from Edward Tong who provided a good off-load in the tackle.

Woody Hamilton-Hurst tackled well and scored a number of breakaway tries while Robert Murdoch showed skill in the ruck. Charlie Rees and Rory Cordingly both balanced big tackles with direct running and, despite some injury set-backs, Thomas Ferguson demonstred his elusive running.

Other highlights included Ethan Shuttleworth scoring several tries by showing his searing pace and making good low tackles while Oliver Hewes threw long passes to go with his good tackling and individual tries. Leo Golledge spotted a gap to streak to the corner for a try while Sam Sidders provided sterling defence to deny opponents from scoring.

Henley Hawks U9s had a successful day at the festival of rugby held at Dry Leas recently.

Every available player had a chance to participate in their first matches since the introduction of tackling to their game this season.

With good competition from visiting teams from Saracens, Reading, Tring, Bracknell, Amersham and Chiltern, Tadley Tigers, Reading Abbey and Alton the Henley teams displayed skill and commitment as well as demonstrating the teamwork, respect, enjoyment, discipline and sportsmanship that are at the centre of this annual festival.

The Reading and Tring teams shared the U9s fair play award while the Henley S team won all of their matches.