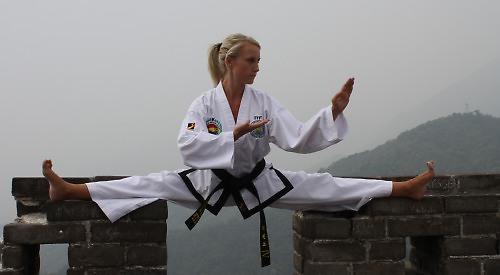 A HENLEY taekwon-do teacher has picked up three medals at the ITF Taekwon-Do World Championships held in North Korea.

The 29-year-old beat Russia and the current European gold medallist from Bulgaria to reach the final of the fourth dan patterns where she lost out to North Korea to take silver.

In the under 51kg sparring event Hutchinson reached the semi-final losing to Russia to take bronze. The England team consisting of six girls won bronze in the team power breaking and picked up seven medals overall to finish the competition in eight place. Hutchinson finished sixth best female overall.

To prepare for the finals Hutchinson had been training every two weeks for four-and-a-half hours at a time in Didcot with the England national squad on top of her gruelling two to three hours, six days a week training schedule.

Hutchinson, who is a certified personal trainer, teaches taekwon-do in Henley for Thames Valley Taekwon-Do schools under master Andrew Whiteley, seventh dan, since moving to the town from South Africa last year.