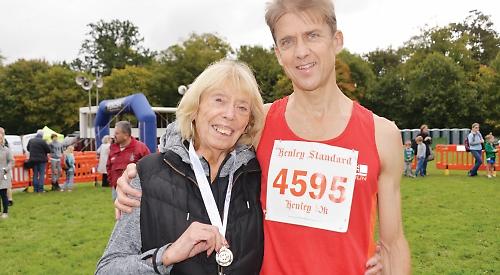 A BOY of 14 won the Henley Standard 10km on Sunday.

Adam Hunt, from Tokers Green, finished a minute ahead of his nearest rival.

The Henley half marathon — now in its 35th year — was won by a man from Brighton on a cool and overcast day that was ideal for running.

This was down on last year’s combined total of almost 1,000 as many people who had registered to run did not turn up.

The races, which are organised by the Rotary Club of Henley Bridge, started and finished at Borlase Field, next to Henley Rugby Club.

The 10km race was started by Tim Dickson, a fund manager at Invesco Perpetual, from Henley, and his daughters Ella, 12, and Martha, nine. All three then joined the race. They also finished close together, crossing the line after one hour and seven minutes.

The runners in the main race were set off by Henley Mayor Kellie Hinton and Ciaran Askin, who is money laundering reporting officer at Invesco Perpetual, which sponsors the race.

Adam, a pupil at Shiplake College, ran the 10km in 40 minutes and 33 seconds, which was 90 seconds faster than his time last year, when he finished third.

He said: “I had a good run and I really liked it. The [Icehouse Lane] hill was difficult but coming down it felt really good. I tried to keep going and not worry about what other people were doing.”

Second place went to Liam Proudlock, 54, who is originally from Sonning Common and now lives in London. He finished in 41 minutes and 33 seconds.

He was raising money for the Fish volunteer centre in Sonning Common, which provides transport for mainly elderly people needing to visit the doctor or hospital as well as leisure outings and shopping trips.

Mr Proudlock’s mother Anne, 78, from Emmer Green, is a client of the charity.

He said: “I wanted to raise money for Fish as its transport allows my mum to go shopping and on day trips. It’s a big group of people so allows her to be sociable.

“I just came and ran my best and had no idea where I was going to finish. The conditions were ideal.”

Mrs Proudlock, who was there to watch her son, said: “Liam did really well. I was very, very proud when I saw him cross the finish line.”

Third place went to Carrie Hoskins, of Watermans Road, Henley, who finished third overall in 42 minutes and 22 seconds and was the first female home.

Mrs Hoskins, 49, said: “It was brilliant. The course is not quite accurate for a 10km as it’s about 0.3 miles too long but I enjoyed it and had a good run.”

The flagship race was won by James Turner, of Brighton and Hove Athletics Club, in one hour, 14 minutes and 17 seconds.

The 27-year-old only signed up for the race a few days beforehand as he and his girlfriend Rosie Neill were due to visit her parents in Marlow.

Mr Turner, who works for the Youth Hostel Association, had competed at the National Autumn Road Relays in Birmingham the previous day.

He said: “I wanted another good workout before the end of my season. I haven’t been running competitively for that long and the marathon is my preferred distance.

“It’s always nice to go out and do a run on a Sunday. I really enjoyed the country lanes and it was nice to be able to run along the river.”

The runner-up was Adam Wood, of Boston Road, Henley, who finished in one hour, 17 minutes and 59 seconds, improving his time of last year by almost a minute.

Mr Wood, a consultant, said: “This is the only race I do every year. It’s the quickest I have run the course, so I am delighted.

“I was third last year and seventh the year before so I hope there is only one way to go after that!”

The fastest woman was Olivia Partington, 27, a trainee physiotherapist from London, who finished in one hour, 31 minutes and 24 seconds.

She said: “It was probably the prettiest course I have ever run. I met lots of lovely people on the way round.”

The second fastest woman was Sophie Whitworth, 47, a triathlon coach at Athlete Service in Henley, who finished in one hour, 32 minutes and 51 seconds.

She said: “I was pretty much spot on with my target.”

Eight-time winner Ben Reynolds, from Harwell, had to pull out mid-race due to a knee injury.

He said: “I started having trouble with it when I turned the corner on to the bridge. Then it conked about six times in the next half a mile before I had to stop on the Marlow Road. It’s a shame.”

Mr Elzinga, a former rower from America, said: “It was a beautiful morning, cool and clear, which is good for running fast times.

“I was running six-minute miles all the way round except for mile nine going up the hill but that’s the same for everyone.”

Friends Ben Wiltshire and Owyn Thatcher, both 22 and from Henley, crossed the line together in one hour, 31 minutes and 45 seconds and raised more than £1,000 for the Chiltern Centre for disabled children in Henley and Kidney Cancer UK.

Mr Thatcher said: “I did a lot better than I had expected.”

Reading East Labour MP Matt Rodda, from Caversham, ran the 10km race and finished 15th, the same position that he achieved last year but in a slightly slower time.

Mr Rodda, a member of Reading Athletics Club, said: “I’m really pleased with how I did.”

Andrew Knight completed his first half marathon and raised more than £600 for Riverside Counselling Service, which is based in Henley.

Mr Knight, from Wallingford, said: “It has given me a massive confidence boost in lots of areas in my life.

“The whole event was amazing and I am looking forward to next year’s race or even another half before that.”

About 130 children and parents took part in the Go Kids One Mile Challenge in Borlase Field.

Organiser Eileen Unwin said: “It was a huge success, obviously helped by the beautiful setting and the weather.

“Bertie Slippers was fantastic in warming up the entrants and brought a party atmosphere to the event.

“We were delighted with the response. We hope to see more participants next year and grow the event further.”

Ian McGaw, president of the Rotary club, said the event went well despite the numbers of runners being down on last year.

He said: “There are so many other races on the same day, including a big race through Oxford city, but we believe we have still made a significant profit to distribute to charity.”

The event raises money for the RNLI and other good causes.

The Mayor said: “It was really good to see loads of Henley people taking part as well as competitors from far and wide.

“Special thanks go to Invesco Perpetual and the Henley Standard and for sponsoring the races and the Rotary Club of Henley Bridge for organising it. I think it does a fantastic job raising money for good causes.”

⚫ A runner in the half marathon was taken to hospital after feeling unwell while running along Fair Mile towards the finish line. Police controlled traffic while the man was lifted into an ambulance on a stretcher before he was taken to the Royal Berkshire Hospital in Reading.