Hawks youngsters hit back with victories at Beaconsfield 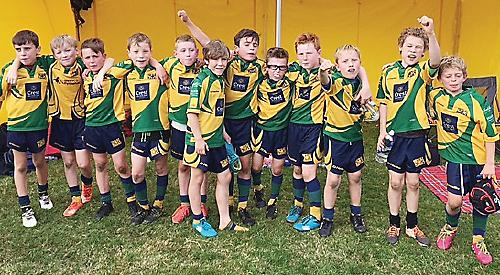 HENLEY U10s had a day of mixed fortunes at the Beaconsfield tournament on Sunday where they played five matches, winning three and losing two with both defeats being by just one try.

The Henley side are still getting used to the introduction of rucking and mauling and the increased physicality that has introduced.

In the first game against Windsor this was the difference. The Windsor boys were stronger as they ran out 2-1 winners.

In the remaining four matches Henley improved in this area with lots of fight for the ball at the breakdown, some strong running, good off-loads and good support play.

The first match against old Windsor saw Henley battle hard against a bigger and more physical team. Henley moved the ball wide at every opportunity. George Bottomley and Rod Murdoch tackled well and were more than a match for the larger team but Henley struggled with the interpretation of the rucking rules. Seb Phyillis almost scored to even the game with the referee calling it short.

Next up Henley defeated Beaconsfield 5-2. The rucking and mauling had improved significantly with Henley wining ball through Charlie Rees and Rob Murdoch. Oli Hewes started to show his game management skills with Luca Coleman also managing proceedings by selling some good dummies and attacking the opposition to create space for his team mates. In their next match Henley defeated Fullerians 5-1 with Felix Cooper showing his pace and sidestepping ability in scoring two tries. Jack Renders also put in some good tackles with Felix Richardson strong in the tackle. Henley started to show their movement and running ability which Fullerians had no answer to. Next up Henley went down 3-2 to a strong Amersham and Chiltern side. Freddie Coultas tackled strongly throughout the day and his running caused the opposition a lot of trouble while Jack Bradbury also started to put in some stronger runs, stepping and drawing defenders before offloading well.

The final game was a must win against Marlow and Henley finished the tournament strongly as they played a good game of skill, passing and high pace. Alex Clarke scored a fine try supporting a break by George Bottomley. Felix Cooper scored three tries with searing pace and good sidesteps while Charlie Rees and Rob Murdoch continued to tackle strongly and put in some hard yard runs drawing in the opposition. Oli Hewes showed good passing skills in putting in a long miss pass to Felix Cooper as Henley triumphed 6-1.