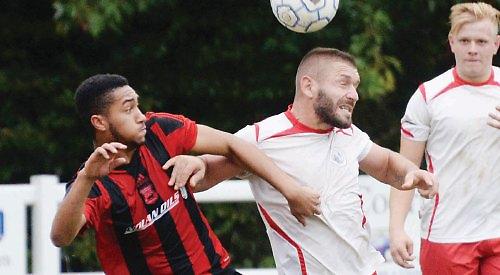 Bottom-of-the-table Henley matched their opponents for much of the game before eventually losing out to an injury time goal.

Henley manager Jock Mowat was forced to make several changes to his side due to injuries and unavailability.

In an end-to-end game, which was interupted by numerous free kicks, Karol Derewekno tested the visiting keeper early on with a direct free kick which was well saved. Soon after a dangerous Bicester cross from the left wing was cleared by Luke Blakebrough before Henley keeper Cosmin Mariah saved a dangerous cross with three Bicester players closing in.

On 24 minutes Ben French saw his shot go narrowly wide of the right post from just inside the box while four minutes later Rupen
Limbu hit the Bicester left hand side netting from close range.

On the half-hour mark the visitors had the ball in the back of the Henley net but the effort was ruled out for offside.

Jack Byerley saw his header from free kick pushed over bar for the hosts before Mariah was called into action again to pull off a close range save from a quick Bicester free kick.

On the stroke of half-time the visitors took the lead when a right wing cross was bundled home by Wayne Blossom.

Bicester started the second half strongly and hit the left hand side netting early on.

Henley had two corners in quick succession that came to nothing before Bicester saw a long range shot from left side go wide of goal.

On 63 minutes Henley equalised when a Derewekno cross from the left wing saw Ryan Szram rise to head home over keeper from 15 yards.

Soon after Henley went close to taking the lead but Abdul Ally’s 25-yard shot narrowly sailed over the bar into the top netting.

Bicester Town then started to pile on the pressure with a string of corners which were defended well by the Red Kites.

With four minutes of the match remaining Henley pushed for a winner with the visitors being forced to make two point blank blocks while a resulting breakaway saw a Bicester player shoot narrowly wide.

With 90 minutes up on the clock and the game entering the second minute of injury time Bicester Town substitute Jack Bailey managed to bundle the ball home after Henley failed to clear their lines.