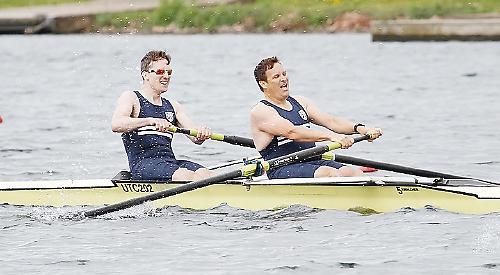 TWO masters rowers at Upper Thames completed a triple crown of wins this year by winning their age category of masters C (43-50) coxless pairs at the pairs head of the river.

Mark Tritton and Nick Horne started rowing together in April this year before competing and winning for the first time at the British Masters Championships in May. They then went on to win the same category at Henley Masters Regatta before clinching the hat-trick in London.

Tritton has only recently returned to rowing, being inspired to pick it up again by his son, a junior at The Oratory School.

The pairs head, held over part of the boat race course from Chiswick Bridge to Hammersmith is the longest of the three events, lasting 15 minutes over the distance of three miles and saw 500 crews entered.

Upper Thames also saw a win for Judith Burne and her partner in their category. Speaking after the win Horne said: “I’m really delighted that we completed the treble, it was a nervous day with expectation on us, but Mark is such a great rower that I never had any doubt that he’d get me down the course fast!”

This Sunday Upper Thames Rowing Club will be hosting its annual autumn head. Crews will set off in two divisions, the morning one starting at 11am and the afternoon one at 2.15pm. The Sutherland Rose Bowl will be awarded to fastest overall crew while The Truman Victor Ludorum Cup to the most successful club.