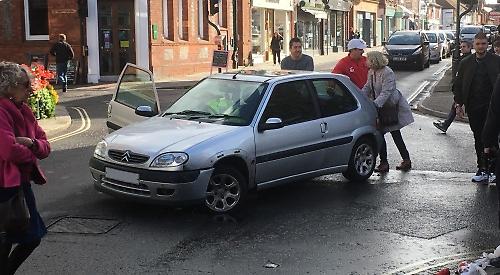 A MAN has been charged with dangerous driving after two cars collided at a crossroads in Henley town centre.

A Citroën Saxo and a BMW collided at the junction of Greys Road, Reading Road, Duke Street and Friday Street at about 1pm on Saturday.

The Saxo was left partially blocking the road after suffering a punctured front left tyre and a buckled wheel, causing queues of traffic to build up. Members of the public tried unsuccessfully to move the car out of the road, although traffic was still able to pass.

Police were called to the scene and arrested a man.

James O’Fiera, 28, of Benares Road, Plumstead, Greenwich, has been charged with driving a motor vehicle dangerously, failing to provide a specimen for analysis and breaching bail conditions. He appeared at Oxford Magistrates’ Court on Monday when he was remanded in custody to appear again today (Friday).