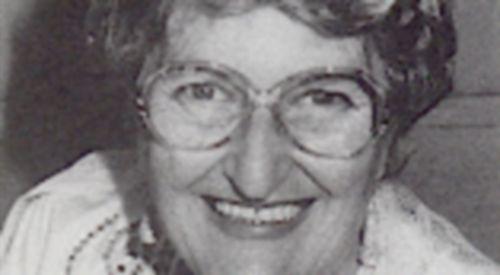 ANGELA was born in 1932 and grew up in Stanmore, north-west London.

On an early visit to Great Ormond Street Hospital, she contracted polio but her mother refused the standard treatment and instead exercised her daughter’s legs every day so that by the age of five she could walk to school and thereafter had minimal problems arising from it.

At the outbreak of war, her mother took Angela and new baby brother Tony to stay with her great aunt, Jessie, in Somerset for safety. The fear then was all about gas attacks.

However, things were so quiet in the following year, which became known as the “Phoney War”, that they returned to Stanmore.

From 1940 to 1944, they had high-ranking RAF officers billeted in their house, who often brought fresh food from their country estates after a weekend break.

One clear, lifelong memory from Angela’s childhood was of a night in 1941 when she was woken by her father, who was a squad leader in the Air Raid Precautions, from her sleep in the air raid shelter he had built in the garage.

He stood her on top of the coal box at the back of the garage and showed her the red glow in the sky to the east. It was the burning of the docklands and much of the City of London.

In 1951 Angela met Bob, who lived a few streets away, and after he had completed his national service in the RAF, they married in 1956.

They were fortunate because their parents, between them, gave the couple their first home, a semi-detached house nearby.

Their two sons, Philip and Michael were born in the following five years.

After the severe winter of 1962-63, they bought a house in the country near Gerrards Cross to make Bob’s commuting easier.

With her sons now going to school, Angela was left with time to return to work.

Having taken a year’s course to improve her secretarial skills, she was able to be the personal assistant to a series of three top-level management men.

The most enjoyable time was the many years she spent with Claude de Lacey Baker, chief architect for the Trust Houses Forte hotel chain, which had 700-plus properties all over the world. Angela counted it the most interesting part of her working life.

In the late Seventies, the family moved for the last time to a picturesque cottage with a large garden on the edge of Stoke Row in the Chilterns, amid the countryside that they had grown to love.

They spent much of their time in the following years tending to and improving the garden and the house.

Angela had a variety of other interests and pastimes but the main one was the local history of the area she now lived in.

She was well-known among friends, acquaintances and work colleagues for being well-organised and she put these skills to good use in this endeavour.

She compiled many files of material on the nearby villages and their houses, gathered from a variety of sources, including decades of the
Henley Standard.

In the early years, she conducted many interviews with the area’s older residents, recording their memories while they were still available. These have now been presented to the Oxfordshire county archives.

After 20 years, Angela assembled what she had learned about the nearest two villages, Stoke Row and Highmoor, into the first of her three books, Dipping Into The Wells.

She made several appearances on local and national TV and radio as an expert on the history of the area, especially the Maharajah’s Well in Stoke Row. She also used her knowledge to act as a guest speaker on local history (and also graphology, the subject of another of her books) on several ocean cruises, always taking her husband with her for logistical and moral support.

Together, the couple saw much of the northern hemisphere, visiting places such as Alaska, Iceland, the Caribbean, Greenland, the Baltic, St Petersburg, the Mediterranean and the Canary Islands, some of them several times.

They also travelled to India to see the six Tibetan children that Angela and members of her family sponsored.

They became key members of the Stoke Row village community, with involvement in running its chapel and producing the parish magazine for nearly 30 years.

For this Angela was recognised in 2016 with the Oxfordshire High Sheriff’s Award, which she collected at a ceremony in Christ Church Oxford, accompanied by her sons.

She was also at her husband’s side in 2013 when he was presented with Maundy money by the Queen for his services to the local community.

In recent months deteriorating health required Angela and Bob to move into a care home not far away, where they were able to celebrate their diamond wedding anniversary together last year and received frequent visits from friends and family.

Angela is survived by her husband, two sons, three grandsons and a great-granddaughter, who was born just a week before she died.