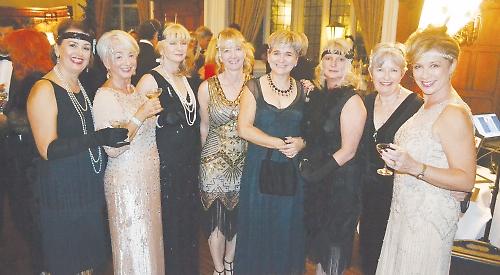 A BALL with a Great Gatsby theme raised more than £15,000 for a Henley charity.

Ninety people attended Saturday night’s event at Danesfield House Hotel, near Medmenham, which was in aid of the Riverside Counselling Service.

The male guests were dressed as gangsters and the women wore flapper dresses for the red carpet champagne reception and three-course dinner.

The evening was hosted by Cliff Gray, who ran a series of fund-raising games.

TV presenter Steve Rider ran a live auction with prizes including a golf day with him, a box at the Royal Albert Hall and a chauffeured Bentley for a day. Singer Rebecca Poole, alias Purdy, and the Hugh Turner Swing Band performed during the evening.

Teresa Johnstone, who chairs the charity’s trustees, spoke about its work.

Emma Lerche-Thomsen, who helped organise the event, said: “It was one of the most spectacular evenings we’ve done. Our guests were friends and family and they entered into the spirit and the venue lent itself well to the theme.”