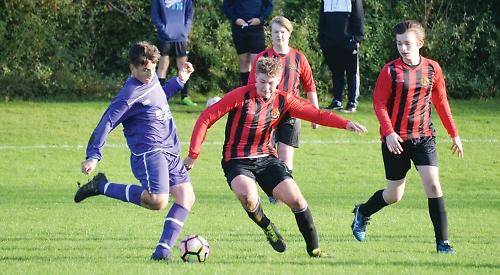 Wolves got off to a good start and scored from a corner after five minutes with an impressive overhead kick into the far corner beating Ellis Dombey in the Henley goal.

The hosts settled into the game and Tom Priestley came close after rising well to head the ball over the opposition bar from a Matt Powell corner.

Both teams battled well for the next 20 minutes before a long kick from the Kites goalkeeper was flicked on by Priestley and latched on to by Lukhanyo Zitha who outstripped the defence and slotted the ball past the keeper into the bottom corner for his fifth goal in two matches.

With half-time approaching the Kites played some good passes between Sam Williams and Seb Beattie down the right hand side before earning a throw in close to Wolves’ goal line. Beattie took the throw which landed close to the penalty spot and was picked up by Cameron Fisher who turned well and slotted the ball into the corner of the goal beating the keeper diving to his right.

The second half started with some tough tackling but was scrappy with neither team having any definite chances on goal with the Kites defence of Greg Bennett, Lewis Coles, Sam Williams, Samuel Baker well screened by Jody Bucket and then Adam Bellman snuffing out all of the threats from Winnersh.

With 15 minutes gone in the second half a big kick from Dombey was again latched onto by Zitha who with a deft flick of the right boot beat the approaching keeper and extended his current goal run to six.

In the next 10 minutes both Fisher and Zitha were unlucky not to score again after the Kites created some good chances with a number of good through balls from the midfield of Joe Morgan, Liam Gaskin, Tom Priestley and Seb Beattie.

Wolves scored what turned out to be a consolation goal midway through the second half. The result could have been very different as Wolves were awarded a penalty in the last minute of the game which fortunately for the hosts hit the post and was then put out for a corner. Lewis Coles was named man-of-the-match.

AFC HENLEY HURRICANES U11s slumped to a 5-1 defeat at MAIDENHEAD MAGPIES U11s as their slow start to the season continued.

Kicking uphill and with the wind whipping up, the storm clouds were gathering for the Hurricanes as they made a slow start to the game much to the frustration of the management team.

The Hurricanes soon found themselves 2-0 down and it would have been worse for the visitors had Ben Horner not pulled off a number of good saves in the away goal.

The visitors started to compete in the second quarter as the midfield pairing of Tom Yeoman and Joe Turner gained a foothold in the match as they strove to drive the team forward and stem the early attacks. Alec Steele fought hard in the away defence and his clever passing allowed the Hurricanes to get on the front foot. Half-time could not come quickly enough for the visitors as they regrouped and looked to take advantage of going downhill in the second half.

Captain Tom Atkinson gave a commanding display that earned him the man-of-the-match accolade as his tough tackling and astute positional play afforded him time and space on the ball. Emergency loan signing Charlie Hunt was also a colossus at the heart of the Hurricanes defence and his strength and touch stood him in good stead. This new found defensive stability allowed the Hurricanes to attack and this bore fruit as Henry Steele applied great pressure to the Maidenhead defence which allowed him to set up Olly Saunders who finished from 10 yards out. Striker Tom Bonser also went close on a number of occasions and was unlucky not to get on the scoresheet.

Just as the Hurricanes were gaining a head of steam the hosts hit back with a strike from 25 yards to go 3-1 up going into the final quarter. This knocked the wind out of the Hurricanes sails as Maidenhead netted two late goals.