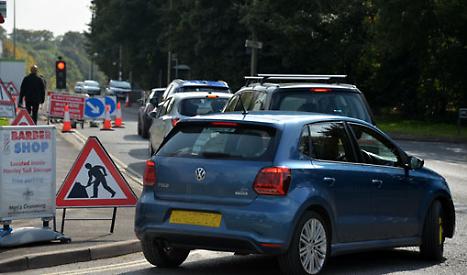 ROADWORKS on two of the main roads into Henley are trade, retailers.

Traders say that shoppers are being put off by the thought of being caught up in queues of traffic by and notices warning of delays.

The A4155 at Playhatch has been closed since August 29 for major repairs and traffic lights have been in place on White Hill, Remenham, since September 4 while Thames Water replaces the water mains.

Laurence Morris, who runs Laurence Menswear in Duke Street and is a member of the Henley Business Partnership, said: “Retail is tough in Henley and it’s not helped by two of the main roads coming into town having roadworks on them at the same time.

“The fact those roads are closed forces more traffic on to Wargrave Road, where it builds up and people turn round to go back home or go somewhere else.”

He attended a meeting of retailers last week where, he said, the majority complained their trade was suffering.

Mr Morris said: “I have also looked back at my notes from previous years when other roads, such as Hart Street and New Street, have been closed due to roadworks and seen that footfall and turnover just drop.”

Mr Morris, who opened his shop in 2012, said October was normally a quietish month but the roadworks had made it even worse.

He said: “It’s important that the people of the town support the local independent traders. Henley is a great town but we need people to shop locally, especially as we approach Christmas.”

“We recognise the work has to be done but we need signage to make it look like Henley isn’t closed for business,” she said.

“That’s how it looks at the moment and it puts people off — it can take a long time to get back.

“This week has been particularly quiet because it’s the school holidays and people do go away for a break before Christmas. You can tell because it has been easy to get a car parking space.”

Jane Tutill, who opened the whole foods shop Willow Basket in Friday Street in February, said she had noticed a decrease in footfall in recent weeks.

“When people come into the shop they tend to buy something but there has been a lack of people,” she said.

“I’m not sure the problem is the roads but it could be a reason.

“I thought we could have been affected by the new shopping centre in Bracknell or possibly people choosing to start their Christmas shopping early and going to the big centres that offer more.”

But other shopkeepers reported better sales than normal.

Emma Downes, who works at The Bell Bookshop, in Bell Street, said: “We sympathise with those who are having problems and we don’t want any more roadworks in the run-up to Christmas, but we are in the fortunate position where we are 15 up like for like in sales.

“We are a destination bookshop so we are very lucky to have loyal customers who continue to support us.”

Matthew Stone, who has run Gorvette & Stone chocolate shop and café in Duke Street since 2004, said: “I have not noticed anything, to be honest. My trade has been as expected.”

Andy Tucker, who runs In the Groove record shop in Reading Road, said he wasn’t sure the roadworks had affected him.

“My trade is so sporadic — it goes up and down,” he said. “There an infinite number of factors that impact on trade and roadworks is one of them but I don’t think it would be decisive.”

Joan Bland, who runs teddy bear shop in New Street and is also a district councillor, said: “I haven’t seen any traffic jams personally and I have not had any problems.

“Henley had always had traffic problems, even when there were no roadworks. If people want to come to Henley, they find a way. I don’t think there have been any dramatic hold-ups.”

The £1.04million repairs to the westbound carriageway of the A4155, near the Flowing Spring pub, are due to finish on November 4.

The work is required as the embankment was found to be slipping, causing the road surface to crack and become unsafe, following flooding in previous years.

The work on White Hill is expected to continue until December 15.

In addition, there is only single file traffic on Greys Road, near Highlands Farm, while new gas mains are fitted for a development of 170 homes nearby. Three-way traffic controls are likely to be in place until November 10.