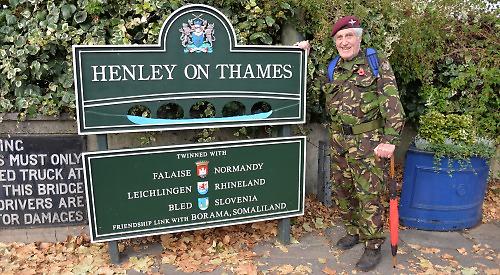 A FORMER paratrooper passed through Henley during a walk in aid of the Royal British Legion to mark his 86th birthday.

Jeffrey Long, from Bingley in West Yorkshire, walked from the Thames Barrier in Woolwich to Caversham, a total of more than 86 miles.

He departed on his birthday on Sunday, October 22 and finished on Tuesday this week.

It is the third year in a row that he has completed a charity walk of the same number of miles as years of his life.

Mr Long came through Henley at about 12.30pm on Tuesday during the final leg of his journey.

He said: “This has been the toughest I have done so far. I’ve really had to push myself.

“I pulled my hamstring and have been suffering with a swollen ankle from when I broke it three years ago and swelling on my left foot where I’ve had it fused.

“I have found doing 12 miles a day has been tough but I’ve met some lovely people along the way.”

During the challenge Mr Long stayed with friends in Weybridge each evening, travelling there by train after his day’s walking.

Mr Long, who has been a member of the Legion for  25 years, raised almost £60,000 after comedian Jason Manford shared his fund-raising page on social media.

He now hopes to meet the entertainer to thank him.

He has previously raised about £160,000 for charity and in 2010 was made an MBE for his fund-raising efforts.

These included a 1,000km walk from London to Lausanne in Switzerland.

His latest walk was also raising money for All Saints’ Church in Bingley and Support Our Paras, a charity that helps Parachute Regiment soldiers and their families who have been affected by service.

He said: “I keep doing it as the charities need money and it’s a shame the Government can’t do more.”

Mr Long was a paratrooper in the Fifties before owning a textile company, working as a project manager for Bradford Council and for the British Transport Police.