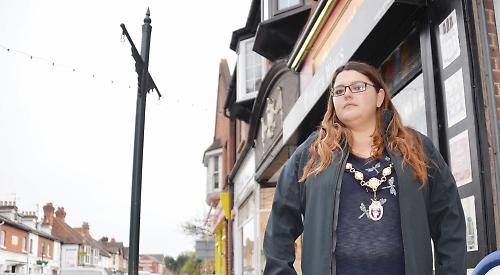 THE Mayor of Henley has criticised a bus company after one of its drivers destroyed two floral baskets in the town centre.

The Arriva 800 bus from Reading collided with the winter baskets, which were hanging from a lamppost outside the Regatta Wines in Reading Road, at about 6pm on Friday.

Both baskets fell to the ground and split open, scattering their contents of soil and plants over the pavement.

They had been installed by Windowflowers, of Burnham, on behalf of Henley Town Council less than a fortnight earlier and were due to remain in place until May.

The driver left the scene but Ben Hinton, the partner of Mayor Kellie Hinton, was on board the bus as he was coming home from work.

When he heard the collision, he got off and took photographs of the scene and the vehicle’s registration number.

Councillor Hinton, who is also chairwoman of the award-winning Henley in Bloom initiative, has reported the crash to Arriva and is asking it to pay the £120 cost of replacement.

She said: “As soon as Ben realised what had happened, he jumped off the bus to get pictures. We need to have those baskets replaced as they’re completely unusable and I intend to charge Arriva.

“I know it’s not a lot of money but we have to hold them accountable as it’s the taxpayers’ money at stake and residents shouldn’t have to cover the cost.

“I don’t drive but I struggle to see how this could have happened. It’s a good job that Ben was there to see it or we wouldn’t know what had happened and would probably have just chalked it up to vandalism.”

An Arriva spokesman said: “We have launched an investigation into the circumstances and will be reviewing our on-board CCTV cameras to determine what has happened.

“We would like to thank [the Mayor] for bringing the incident to our attention and if we are responsible then we would look to make good any damage.”