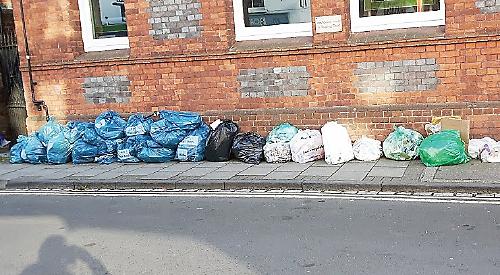 RUBBISH has been stored illegally by Henley Town Council for months, the Henley Standard can reveal.

The Environment Agency says the council does not have a permit to store waste at its depot off Reading Road that would ensure it was within the bounds of the law.

The council claimed to have solved the problem with commercial waste being left piled high in the town centre and began using the depot to store it before it was collected.

But it has now been told by the agency that it must comply with the law.

It comes in the same week that trade waste was found piled up around the public bins outside Starbucks in Market Place and along Friday Street.

“We’re not intentionally storing illegally, we’re trying to make it legal but at the end of day we have to bow to the regulations which are coming out of the Government all the time and may get more stringent in future.”

This meant the rubbish was left in the streets all night, sparking concerns about the effect on the town’s night-time economy, particularly during Henley Royal Regatta and the Henley Festival. In June the streets were piled high with rubbish just days before the town’s busiest two weeks of the year.

In July and August, the council paid £6,210 to another contractor, GT Can Do, of Henley, to pick up the blue bags in the evenings and store them at the depot overnight for collection.

At the same time a cross-party of group councillors negotiated with Grundon to resume evening collections.

However, the waste has continued to be stored at the depot unlawfully and Mrs Wheeler and Councillor Stefan Gawrysiak, chairman of the waste working group, have been told by the Environment Agency that the council needs an environmental permit.

Mrs Wheeler said she still believed the issue was a “grey area” as the council was allowed to pick up waste on its own land and store it at the depot but not waste from traders in the town centre.

She said: “We’re not allowed to pick up commercial waste and store it in split compartments which are then picked up by [contractors] Grundon and Biffa.

“It’s not a massively different step to collecting and splitting up recycling and mixed waste that’s not on our own land but unfortunately the law says you can’t do that.

“One of things that did come out of the meeting is that, actually, there’s no legal right for any company to put their waste out on the pavement.”

Councillor Gawrysiak, a member of the council’s ruling Henley Residents’ Group, said the current operation was working “superbly well” with Grundon collecting commercial waste every weekday at 5pm and transporting it to the depot and putting it in company bins.

But he added: “The Environment Agency had said that in order to regularise this we need an environmental permit which we will be actively discussing with the waste group in the next couple of weeks and will come to a conclusion.

“We have said to the Environment Agency we’ll go back to them in two or three weeks to tell them what we’re going to do.”

Councillor Julian Brookes, leader of the Conservatives on the town council and a member of the working group, said he had not been told about the outcome of the meeting with the Environment Agency.

He said: “I would certainly have appreciated at least a confidential note to say what had happened and I’m looking to have an early meeting of the working group.

“The site needs to be made legal and if the agency says this is what we need to do let’s get on with it.”

An Environment Agency spokesman said: “We believe that although the operator had the right intentions, the storage of waste at Reading Road requires an environmental permit.

“We gave advice on how the site can be brought into compliance and the council are investigating their options to make sure the waste is stored legally. We will follow up and discuss with the council what actions they are taking.”

Meanwhile, on Monday a large pile of bags appeared outside Starbucks and on Sunday afternoon a long line appeared in Friday Street after the council stopped paying for weekend collections by another contractor, Berkshire Clearance.

Cllr Gawrysiak said: “Weekends has stopped because there wasn’t a very large take-up. We had conversations with retailers, saying they should store the waste over the weekend and put it out on the Monday because the weekend collections were at a cost to the town council of £180 per week and we didn’t think that was value for money.”

He claimed Starbucks staff had put its bags out at 10am, rather than keeping them inside until later in the day when they were due to be collected, and said this was unacceptable.

He added: “Friday Street has always been an issue and that’s been a combination of businesses putting their waste out and a bit of fly-tipping as well.”

Paul Brown, district manager for the Soul Coffee Company, Starbucks’ licensee partner, said: “We apologise for the rubbish issue from our store on this particular day.

“It was due to confusion around the collection time and many retailers in the area were affected.

“The cleanliness of Market Place is important to us and the team is working to ensure this doesn’t happen again.”