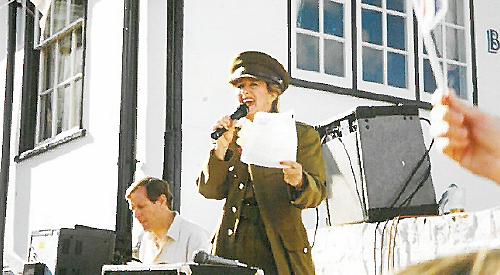 THE importance of the Poppy Appeal was apparent to Connie Butt from a young age.

Her father Sam Turton served in the Royal Navy as chief stoker on minesweepers during the Second World War and during the Suez Crisis in the Fifties.

She recalls: “The stories he told me as a child enlightened me to the horrors of war.

“The struggle to survive, the loss of many friends and family and those who suffered burns and loss of limbs outlined to me the importance of the poppy.

“He was mainly in the North Sea. He used to tell us stories about the clink on the side of the boat as it brushed past a mine and everybody running to the top of the ship, leaving him in the bowels.

“At a very early age I would always follow him and watch Remembrance Sunday parades with my family and I still get withdrawal symptoms if I can’t.”

Her mother Elsie worked in the communications centre at Plymouth naval barracks with the Women’s Royal Naval Service, known as the Wrens.

Here she relayed messages between commanding officers and the fleet.

Mrs Butt says: “On one occasion the Admiral of the Fleet Louis Mountbatten stopped her and asked her to take a communication to another part of the base. Of course, he was the heartthrob of the time!”

She followed in her parents’ footsteps by choosing a career in the military, joining the RAF in 1960, when she was just 17.

“I wanted to see the world and something outside of Plymouth,” she says. “I was in the accounts department doing airmen’s pay and officers’ travelling allowances and the cash account for the station.”

She was posted to the central flying school of the RAF at Little Rissington in the Cotswolds.

She recalls: “I enjoyed the first two years because the national service boys were still in and we had our own jazz club and rock ’n’ roll bands, so it was a very entertaining time.

“There were 2,000 men on the station and approximately 50 women. I was known as the ‘wild woman from the West Country’ because I sang on the bar tables and everywhere I went! I used to sing Shirley Bassey and I also played the castanets and did Spanish dancing. I also did Connie Francis because she was big at the time. I just loved entertaining and singing.

“I had the chance to sing with the band at RAF stations across the country but my flight sergeant said I should stick to accounts.”

It was at Little Rissington that she met Ken Butt, a sergeant in the RAF, and the pair were married in 1964.

After two years at the base, they were sent to RAF Innsworth in Gloucestershire before being posted to RAF Gutersloh in Germany, where she continued to work in accounts.

Mrs Butt left the armed forces after about four years but then worked as a civilian in accounts at another base near the German-Dutch border.

The couple’s daughter Sam was born in Münster in 1965 and three years later the family returned to Britain, initially at RAF St Eval in Somerset.

Their son Christopher was born in London the same year and after spending two years in the capital, the family moved to Plymouth in 1972.

In 1985 Mrs Butt moved to Henley, taking a job at the old Royal Hotel, checking guests in, taking bookings and cleaning for a year.

Her husband stayed in Plymouth and the couple were divorced in 1987.

She also worked at Jewsons in Reading Road as a kitchen designer and held other jobs, including selling tropical plants and working as a financial advisor.

In the early Nineties she began collecting for the Poppy Appeal.

She explains: “A friend of mine, Andrew Finlay, sold the collection tins and asked me if I would help out. I’ve always believed very strongly in the British Legion and the good they do in caring for our veterans — for servicemen and women.

“I think if you go back to the First and Second World Wars there was not the aftercare there should have been. We didn’t have all these things in place to help people rehabilitate after war and to build their confidence and many were completely neglected.”

Mrs Butt, who has been the manager of Henley’s Over-60s Club for the last 10 years, began donning her army uniform and taking to the streets to collect for the charity.

In 1994 she organised an event at the Aspect Park Golf Club on Remenham Hill, which has since closed, singing Vera Lynn songs.

The following year she organised a VE Day 50th anniversary celebration at the Angel on the Bridge pub and on Henley Bridge on the May bank holiday.

She recalls: “There was nothing going on in Henley at all so I went to the town hall. The town clerk said, ‘if you want to do something, Connie, go ahead’.

“I rang Oxfordshire County Council. Normally it takes three months to get Thames Side closed but I managed to get it done in three weeks.

“Then, with the help of the Angel on the Bridge, which was then run by Jeremy and Chris Butler, I built a stage at the side of the pub leading down to the river.

“Roger Selman, a friend of mine who was in the Royal Marines, was a fantastic piano player and I asked him to perform.

“I had 600 song sheets printed with 12 songs on them. We did three shows at 2pm, 6pm and 8pm. They rigged up a sound system and you could hear me from Remenham Hill all the way to the station.

“The first show was for the elderly and one of the songs which was appropriate for them was Keep the Home Fires Burning. I said ‘these people were the backbone of England, without them we’d have nobody in the factories’.”

Being a bank holiday, the town was packed with tourists and Mrs Butt was asked to sing by a group of Germans. She performed a number as Marlene Dietrich, dressed in a long black coat and black trilby. At 8pm the Last Post was sounded and 500 silk poppies were thrown from Henley Bridge and out of the windows of the pub.

Now 74, Mrs Butt says this celebration was the highlight of her fund-raising work for the Legion but she has continued to collect around the town every year, raising more than £20,000 over 25 years.

“No one likes to walk past a woman in uniform do they?” she laughs. “In fact, they’re not allowed to. I say, ‘you don’t expect me to carry all those coins’ and ask for notes!

“It’s my passion. I’ll keep going as long as I enjoy it. I’m quite competitive because I always like to get more money than anyone else.”

She collects outside the station from people getting off the train, then outside the Angel on the Bridge and then goes into the town centre, where she visits shops and offices.

“I then sit in Falaise Square and have a glass of red wine,” she laughs.

“I think it’s to do with how well televised it is and the lead-up to November 11. I think it makes people more aware of what’s going on.

“With Prince Harry’s work [with veterans] it makes younger people far more aware when they might not have thought about it before.

“We must introduce to younger people the need to support and to carry on the good work of the Royal British Legion.

“It’s also the medical advances that help. Those who have lost limbs now compete as athletes so you can see the result of what the money you give can do.

“We also have more variety of things to sell. There are things for children like wristbands and also enamel brooches.”

For the last five years she has also organised a Poppy Appeal dance at the town hall to raise money.

“I think the people of Henley have been very generous,” she says. “To me, the poppy is a reflection of time, bringing us all together to remember and mourn all those who fought and are still fighting to keep our world a safer and better place.

“The Royal British Legion helps all those in need.”