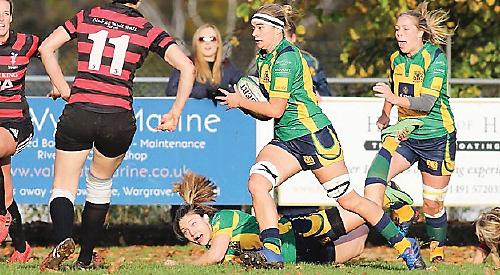 ANNE WHEELER celebrated her 100th appearance for Henley Hawks Women last Sunday as she helped her side to a 29-5 win against newly-promoted Blackheath Ladies at Dry Leas.

The Hawks started with strong conviction and intensity working their way into Blackheath’s half. An early line out in the visitors 22 gave the forwards the opportunity to catch and drive setting a good platform for the backs to have an attack. Hearn broke the line to offload to Dudding who lost control of the ball over the line.

The Hawks defended well and Blackheath could not find a way through. Out of ideas they had no choice but to kick which was charged down by Solowin for Hearn to quickly react and touchdown over the whitewash. Humphrey’s converted to make it 7-0.

From the restart Henley worked their way back up the pitch. Solid control at the break down and strong forward runs from Barrett, Wysocki-Jones and Wheeler allowed the perfect platform for the backs, Dudding dummied and found a hole to run in for the Hawks second try. The conversion was unsuccessful.

Poor discipline by Henley allowed Blackheath into the 22. The Hawks were defending well with quick line speed from Timmins and Balmer sending the Blackheath attack backwards. Some silly mistakes from Henley allowed visiting side to opt for scrums, the only area that they were dominating in.

With the last play of the half the Hawks won a penalty but the ball did not go dead and allowed the Blackheath winger to have an attack and secure a penalty meters from the line. Opting for the scrum again they drove Henley over the line to leave the score 12-5. at half-time.

Henley started the second half well and managed to keep their opponents in their own half for the rest of the game. The Hawks again were making errors and the penalty count was rising.

Subsitutions Krabbé and Collins with fresh legs led the defence and put in some big hits. This lifted the home side and solid runs by all forwards built the platform for the backs. A quick tap penalty saw the ball go through the hands to get wide for Humphreys to finish strongly in the corner to make it 17-5.

The Hawks were dominating all over the pitch, playing good rugby the were back in the opponents 22. Another penalty was well executed and safe hands saw Humphreys with the ball again and with a bit more work to do she went over for her second of the day. With minutes remaining on the clock the Hawks were hunting for the try bonus point with the rest of the substitutions coming off the bench making a huge impact.

Blackheath made a break down the wing with Solowin making a fine cover tackle only to get back to her feet and blasting the ruck to win the ball. This allowed quick reactions from Collins to pick and put Wheeler into space for a 50m run, beating the fullback she went over the line to secure the bonus point. The conversion made it 29-5. Coaches player-of-the-match went to Davidson for her defence and dictatorship while players’ player-of-the-match went to Solowin for her work rate.