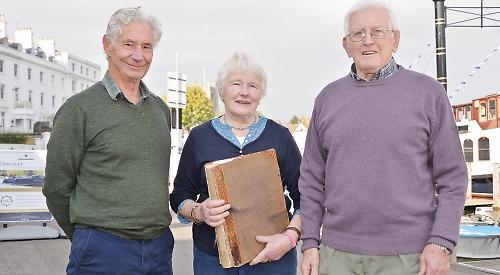 OLDER residents of Henley may recall when the Queen visited the town in July 1972 to officially name a lifeboat.

But no one is alive to remember a similar ceremony 90 years earlier, when a wealthy local family staged a large public ceremony to christen a vessel they had paid for.

John and Lily Noble, who lived at Park Place in Remenham, gave the Royal National Lifeboat Institution £800 to build the boat, which they named The Cyprian.

The couple were inspired by the sinking of the cargo ship SS Cyprian in Cardigan Bay a year earlier, when 20 of the 28 people on board drowned. The victims included the captain, who surrendered his lifebelt to save a stowaway child.

The timber lifeboat was built on the south coast and on July 11, 1882 was brought by train to Henley, where it was loaded on to a cart and towed by horses to Hoopers’ moorings at the junction of New Street and River Side.

According to the Henley Advertiser, a procession formed at the station, headed by the Henley and Twyford Volunteer Band.

The boat followed with its crew and apprentices, with the Nobles and their children to the rear.

The procession made its way along Thames Side, then diverted via Hart Street, Bell Street and New Street before stopping at the moorings, where Mrs Noble gave a speech in “drenching showers”.

She told the gathering: “I am happy that it has fallen to my lot to confer such a benefit on my fellow creatures as I have this day the pleasure of presenting this lifeboat… in the hope that it will be the means, under divine blessings, of saving those who may have the misfortune to be shipwrecked on that dangerous coast and of the heroic conduct of those brave sailors who volunteer to man these lifeboats, there is little doubt of its suitability.”

The vessel was then transported by river to Llanaelhaiarn in North Wales, where it served for several decades. The story has been brought back to light by Cate Gough, from White Waltham, whose great grandfather George Stanton was estate manager at Park Place during the 1880s.

He was present at the ceremony and took a photograph which he placed in an album chronicling his time in the job.

Mrs Gough, 78, has owned the album for many years and showed it to Tony Hobbs, who is a director of Henley boat hire firm Hobbs of Henley and president of the RNLI’s fund-raising group in Henley.

She said: “I’ve always felt that it’s an interesting story which deserves to be told. I don’t have a lot of information about my great grandfather’s life but I do have records of his time at Park Place, where he designed the grounds for the Nobles’ son William’s 21st birthday.

“It amazes me that Mrs Noble gave a speech in the pouring rain without a microphone. She must have really needed to project her voice in order to be heard.

“The newspaper report also states that several people who were watching from a stand in the stewards’ enclosure were injured when it collapsed. It doesn’t go into any more detail, perhaps because they didn’t want it to detract from the occasion, but it would be fascinating to learn more about that.”

Mr Hobbs, 84, who was present when the Queen named the Royal British Legion Jubilee lifeboat in July 1972, said: “I had no idea about this and thought the royal visit in the Seventies was the only time a lifeboat had been named in Henley.

“I’m really grateful to Cate for drawing this to my attention and I love the photograph of them in their cork lifejackets and sou’westers.

“It’s incredible to think that they brought that boat all the way to Henley by train and paraded it around the streets. It was a very generous gesture as £800 would have been a lot of money in those days considering that we had to raise £32,000 for a new lifeboat in 2009.

“It also shows that we have always depended on people’s generosity to keep going. Our crews are made up of brave and committed volunteers and it’s the finest service in the world, bar none, for anyone who is in danger on the seas.”

The Noble family, who made their fortune in paint and varnish manufacturing, were known for their generosity and Noble Road, off Reading Road in Henley, is named after them.

They bought Park Place in 1869 and it remained in their possession until the end of the Second World War, when they sold it to Middlesex County Council for use as a special needs school.

It passed back into private hands in the Eighties and was sold in 2011 to Russian exile Andrey Borodin, the former president of the Bank of Moscow, for a then record of £140million.