1,500 vulnerable children helped by charity in a year 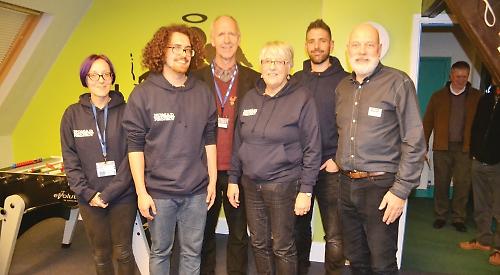 MORE than 1,500 children and young people were helped in one year by the Henley youth and community project Nomad.

It made almost 5,000 interventions involving vulnerable youngsters in the 12 months to March 31, the charity’s annual meeting heard.

The charity has also started detached work at the new skate park on Thursday afternoons.

Youth and family team manager Tim Prior said: “Our work is wide and varied. It’s challenging and sometimes demoralising but when you see the children succeeding it’s very rewarding.

“At Gillotts we mentored 16 young people and we are also mentoring at a couple of primary schools on a weekly basis. We can develop trust and it allows young people to open up.

“We also work with targeted young people at college. We can help them with things like writing CVs, substance abuse and housing.”

Funding co-ordinator and family support worker Sue Prior added: “I’ve done lots of things but parenting and working with parents is one of my favourite. There aren’t many other projects that do that.”

Nomad organised a trip to the Querubi Camp in southern France where youngsters worked on an olive farm as well as exploring the countryside and taking part in activities such as hiking and bouldering.

The Nomad food bank, which is supplied by donations from primary schools, churches and the Henley branch of Tesco, handed out about 250 emergency food parcels and 130 Christmas parcels to more than 600 people in the area.

The meeting at the d:two centre in Market Place on Monday heard from Henley Baptist Church pastor Roger Cole, who is chairman of trustees, and Mrs Prior and there were presentations by Mr Prior and youth and families workers Sarah Lane.

Fellow youth worker Joe Millar, who joined the charity in the summer, read a poem he had written about Nomad and showed films of the charity’s activities. Board member Martin Doe said the charity was hoping to become a training organisation so that people working there could earn accreditation.

He said: “One of the things we want to do in the future is home-grow talent, which will enable us to expand what we do.”

Businessman and supporter Chris Ward said the charity would continue to hold fund-raising events including bike rides, walks, boat cruises and a “celebrity dinner” in the autumn.

Mr Ward said he had a “big event” planned. Henley Mayor Kellie Hinton, who attended the start of the meeting before leaving for another engagement, said: “I have such deep admiration for Nomad.

“Because of the area we live in, it’s easy to point fingers and say ‘let’s get the police on that’. Actually that’s the last thing young people need. They need help in making the right decisions. I’m so grateful for the work you all do here and I hope it continues for many years to come.”

• A boxing night in aid of Nomad at Henley town hall on Wednesday evening was cancelled after Twyford Boxing Club pulled out.