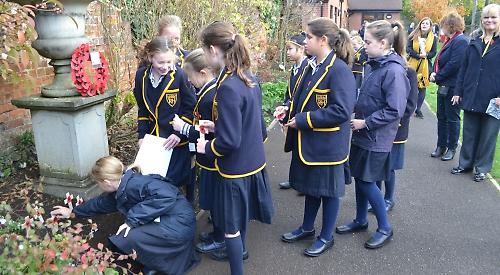 PUPILS at Rupert House School in Henley held a service of remembrance for those who died in the First and Second World Wars.

The children laid a wreath of poppies in the grounds of the Bell Street school and planted dozens of crosses, each commemorating a former Henley resident who died in service. Each pupil had researched a soldier from the book Bringing Them Home, which was written by amateur historian Mike Willoughby to honour the fallen.

The former servicemen’s details, including their age, home address, and family when they died, were written on the crosses along with messages of thanks from the children.

Mr Willoughby, from Woodcote, dressed in a First World War soldier’s uniform for the service in the school playground, which was conducted by headmistress Clare Lynas and a group of pupils and staff. Head girl Jessica Brindle, classmates Tzipi Butcher, Hope Hawkins and Liberty White and teachers Anne Wheeler and Camilla Earp told the story of the Armistice and read the poems For The Fallen by Laurence Binyon and In Flanders Fields by John McCrae.

Andy Congden, a professional trumpeter, performed the Last Post and Reveille and a two-minute silence was observed. Jessica then laid the wreath with Archie Thomas, who is in the school’s reception year.

Mrs Lynas said: “It’s lovely that the children were able to learn about people who lived in Henley as it makes the war that much more ‘real’ to them.

“The service went very smoothly and I thought the children read beautifully. Everyone was very respectful and quiet during the two-minute silence, even the tiny ones.”

Mr Willoughby said: “It was a privilege to be here and I think it’s great that children are learning about the impact of the war locally.

“Little did I know when I started the project that my research would be used in this way. It makes me very proud.”