Town centre silent in remembrance of the fallen 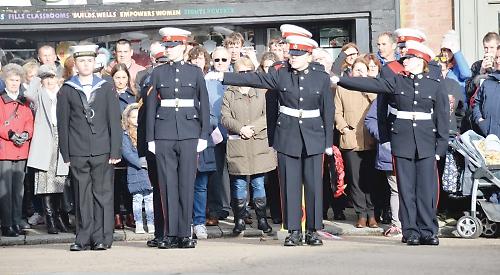 HUNDREDS of people gathered in Henley town centre on Sunday to honour the war dead.

The crowd assembled in front of the town hall in Market Place on a cold and clear morning for the annual remembrance parade and service.

Some were in place more than half a hour before the event started at 10.45am to make sure they had a good view.

The parade, which was marshalled by Major Paul Smyth, of 7th Battalion, The Rifles, began with five members of Henley Sea Cadets marching into the square from Greys Road car park and forming a guard of honour outside the town hall.

They were followed by other sea cadets, army and air cadets, veterans and serving servicemen and women, civic dignitaries and representatives of the Henley and Peppard branch of the Royal British Legion.

Some groups carried their standards, which were used during the service, many younger participants following John Green, standard bearer for the Legion.

They then formed a semi-circle around the town hall for the ceremony.

The parade was followed immediately by a fly-past by two helicopters, a Chinook and a Puma, from RAF Benson.

They flew down Gravel Hill, over the town hall and then over St Mary’s Church in Hart Street before turning back towards Bix.

After the fly past, new town sergeant Jason Acock, of Queen Close, Henley, and Mayor Kellie Hinton led out a procession of councillors in formal civic attire from the town hall.

Rev Canon Martyn Griffiths, the rector of Henley, led the 30-minute service for the final time as he is to retire in January.

He said: “My brothers and sisters, today we gather, as we do each year, to pray for peace in the world God made and peace for which so many have already laid down their lives and for which so many continue to die, day by day.

“And we remember them before God with both grief and pride and thanksgiving. We pray for all who suffer still because of war and terrorism and we ask for God’s help and blessing for ourselves, that we may do his will and that the whole world may acknowledge him as Lord and King.”

Brig Malcolm Page, president of the Henley and Peppard branch of the Royal British Legion, read the Ode To Remembrance from Laurence Binyon’s poem For The Fallen.

Gregor Spowart, of the Woodley Concert Band, sounded the Last Post and standards were lowered.

There was then a two-minute silence during which spectators bowed their heads to reflect before Reveille was sounded and Brig Page read the Kohima Epitaph.

Backing music was provided by the Woodley Concert Band, who were in a marquee in Falaise Square.

She pledged “to keep the faith” and to wear a red poppy of Flanders Fields as a sign of remembrance and the emblem of keeping the faith of all who died.

She said: “Good morning, ladies, gentlemen and children. Thank you all for joining in this, one of the most important events in the calendar, when we honour the memory of those who fought and died for us, not only in the First World War but also the Second World War and the subsequent conflicts, including Korea, Malaya, Kenya, Borneo, Afghanistan and Iraq as well as in Northern Ireland. This list is incredible.

“Yesterday was the 99th anniversary of the Armistice that ended the fighting at 11am in France and Belgium.

“The previous year, 1917, had been significant in a variety of ways. Russia had dropped out of the war but remained in the field on the German eastern front.

“While we are mainly focused on the pain and suffering endured by local people, we should not be unmindful of the grief elsewhere.

“For example, in February 1916, the German army attacked Verdun, a major French fortress town, in the longest and deadliest battle of the war. It lasted over nine months and resulted in almost 681,000 French and German killed, wounded and missing.

“In the same year, the French army had participated in the Battle of the Somme in greater strength and more success than the British forces.

“It brought all the French army near to mutiny, so Field Marshall Haig and the British army had to fight the Battle of Third Ypres in 1917 to relieve the pressure on the French army and give Petain the opportunity to restore order.

“The American army was being built up but was not ready for deployment.

“The best news was from Palestine, where Allenby’s trooped captured Jerusalem from the Turks and, in the words of the Prime Minister, ‘gave it as a Christmas present to the British people’. All this helped to set the scene for victory in 1918.

“We commemorate these events by wearing the poppy, the symbol of suffering and patience.

“The funds you donate in return for your poppy go to the Royal British Legion, who ensure that it reaches the needy, both the veterans themselves and their dependants. There are still six million people in this country who are entitled to call on the Legion for help.

“Every penny is spent with the greatest care and your generosity is most welcome and appreciated.

“This is the most appropriate place in Henley to hold this service. I am flanked by the names of the Henley dead of the First and Second World Wars while inside we have a much more complete list of the First World War local dead thanks to the detailed research of Mike Willoughby and his wife. Please study them carefully.

“As many of you know, I have chosen to spend this year focusing on young people in Henley. I have found myself wondering how young people will continue to remember these heroes.

“I was invited to join a ceremony on Friday at Makins recreation ground organised by Councillor David Eggleton, where we listened to year five children from local schools read their own poetry about how they remember and what remembrance means to them before planting crosses.” The Mayor then read a poem written by children at Sacred Heart Primary School, which was read aloud at Friday’s event. It was an acrostic in which the first letter of each line spelled the word “Remember”.

Then the crowd joined in the singing of I Vow To Thee, My Country before Canon Griffiths led the Act of Commitment and The Lord’s Prayer.

The National Anthem was then sung during which senior servicemen and the guard of honour saluted.

Canon Griffiths then read the blessing before wreaths were laid on the town hall steps.

The wreath laying was led by Deputy Lord Lieutenant of Oxfordshire Bernard Taylor and the Mayor.

They were followed by Councillor Julian Brookes, who laid a wreath on behalf of Henley MP John Howell, who was attending the remembrance service in Thame.

Mr Green laid a wreath for the Legion after which he touched the war memorial and then saluted.

This was followed by a march past led by the former servicemen and women. They paraded around Market Place with Mr Green holding the Legion standard at the front.

As they passed the town hall, many in the parade saluted the war memorial and dignitaries before returning to Greys Road car park.

The crowds applauded and cheered all the participants.

After the service, a reception was held at the town hall.

• Brian Hughes, the standard bearer for the Henley and Peppard branch of the Royal British Legion since 1999, was unable to attend the service as he was unwell. Mr Hughes, of Harpsden Road, Henley, has also been unable to collect for this year’s Poppy Appeal, which he has done since 1995, raising more than £60,000.