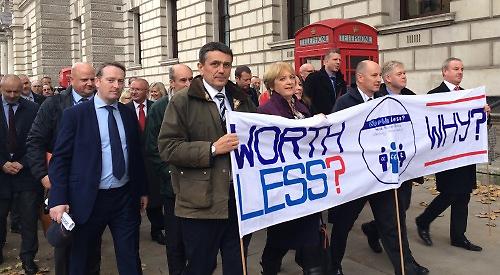 THE headteacher of Gillotts School in Henley helped deliver a letter to Chancellor Philip Hammond calling for better school funding.

Catharine Darnton was among a group of headteachers representing the Worth Less? campaign group from more than 25 counties.

They travelled to No 11 Downing Street to hand over the letter, which called for
£1.7billion that they claim has been cut from the schools budget to be reinstated.

They argued that this would prevent class sizes rising above 35, schools stripping away all but the basic curricular provision, fewer extra-curricular activities, further sixth form closures, vulnerable students not receiving comprehensive supper and requests to parents for voluntary donations.

“It is wrong to say there have been cuts to education,” he said. “That is misleading. The new formula used to disperse the money to schools provides cash gains in respect of every school.”

But in a joint reply, Ms Darnton and Rick Holroyd, headteacher at Langtree School in Woodcote, said: “The Institute of Fiscal Studies concludes that there will still have been a real-terms cut of 4.6 per cent between 2015 and 2019.”