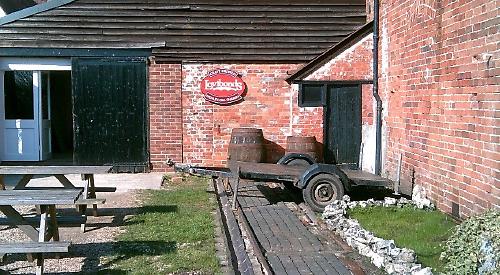 A HENLEY microbrewery under threat from redevelopment has secured new premises.

Lovibonds is set to move to an unnamed location on the outskirts of the town if the scheme to redevelop its premises in Market Place goes ahead.

David Fitz-John, from Goring Heath, has applied for permission for seven one-bedroom flats.

He already has consent to convert the first floor offices and the existing residential accommodation at the front of the site into four flats and is now proposing to create three more by demolishing the lean-to brewery shed and retail storage building and by removing the internal walls and stairs in the shop.

More than 450 people have supported a campaign against the plans.

She said: “I note the public’s concern over the perceived loss of the Lovibonds brewery and ‘community space’ in the town centre. I appreciate that Lovibonds is a much-loved and valued business and community hub.

“The applicant has advised that ‘the brewery have secured alternative premises on the outskirts of Henley and that production and their core business activities will not be disrupted by these proposals or result in loss of employment’.”

Jeff Rosenmeier, who set up Lovibonds in 2005, has refused to comment but wrote on Twitter that it was the company’s tasting room and barrel store that were in jeopardy, not the brewery itself.

The brewery runs tours, a beer school and an annual hop-picking event, as well as showcasing live music and hosting a number of charitable and community events for the Henley Fringe Festival, Henley Youth Festival and the annual PIP Mountain Bike Challenge.

Scores of residents have registered their opposition to the redevelopment plans with South Oxfordshire District Council, the planning authority, as well as praising Mr Rosenmeier for putting his business at the heart of the community.

Jamie Taylor, of Reading Road, said: “Lovibonds provides an excellent platform for all manner of smaller independent events, something which sadly is often overlooked in favour of development for capital gain.”

Maggie Neale, of Paradise Road, said: “The current site provides a much-needed outlet for people of all ages in Henley and visitors and is one of the few not owned or run by a large company or brewery.

“It enables the community to participate in the many events hosted here and is a huge community asset. There is no other similar venue in Henley. It has become part of the social fabric of the town. Henley-on-Thames is in danger of becoming an enclave of the wealthy old. To remove another community hub would in my opinion be a dereliction of the council’s duty of care to all members and ages of the Henley community.”

Rachel Hughes, of Marmion Road, said: “We are in danger of becoming a high street you could find anywhere in the country. Nothing individual at all, we have nowhere unique that you can hear live music.”

Tim Janisch, of Greys Hill, said: “It’s an appalling thought that seven people might gain accommodation on this site, while scores of people have to find somewhere else to go to meet.

“The change of use would substantially alter the character of the area, not just the immediate vicinity but the town as a whole. There are fewer and fewer places with character in the town — Lovibonds is one of the best things about Henley.”

Robert Green, of Reading Road, said: “This is a very special, historic building currently put to excellent use by Lovibonds, a thriving brewery business selling fine local craft beer. It provides huge benefits to the town as a venue which hosts and supports performing arts, community and charity events.

“Its perfect setting and quirky charm attracts many visitors and locals alike to enjoy a very unique atmosphere — nothing else in Henley compares. The loss of this space to residential would be devastating.”

John Savage, of King’s Close, said: “The desired outcome of this application effectively eradicates one of Henley’s most unique social hubs and destroys Lovibonds Brewery, which has been at the heart of many philanthropic and charitable events.”

The application says the site has planning and listed buildings consent for change of use of the offices and conversion of the existing residential accommodation.

But this is now of “questionable viability” given the extensive work required to restore the listed building to a sound condition.

The design and access statement says: “As such, it is considered necessary to extend the proposals to create additional dwellings on the site to improve the viability of the scheme.

“The new-build dwellings are located at the rear of the site and linked to the existing brewery. It is proposed to rebuild the existing lean-to brewery shed to form two flats.

“The existing shed is in poor condition, is a contemporary construction and is considered to be of little historical significance.

“The shed will be clad in timber weather boarding to reflect the character of the existing structure. Likewise, it is proposed to rebuild the small storage building, currently associated with the retail unit, to form a single flat.

“The storage unit will be rebuilt to reflect the character of the lean-to brewery shed and will be similarly clad in timber weather boarding.”

The district council will make a decision by November 30.

Mr Fitz-John did not respond to a request for comment.