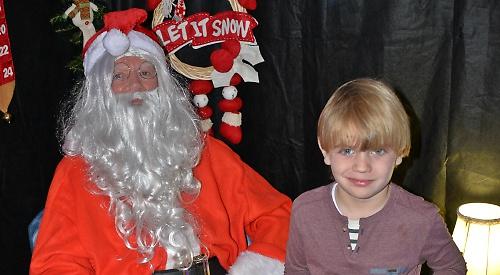 Max and his sister Ava, 10, were also the first children to enter the grotto two years ago.

The children’s mother Sam said: “Ava’s not interested now that she’s a bit older but Max is still very excited about seeing Santa. He’s going to ask for a skateboard this year.”

The grotto was first launched more than a decade ago by Henley Lions Club. It was originally based at the Wyevale garden centre, near Shiplake, but when that shut in 2009 it moved to Toad Hall, off Marlow Road.

It is designed and built by Lynn Burgess, an assistant at the garden centre, with help from her colleagues. It features a miniature “forest” of Christmas trees, other festive scenes and stuffed reindeer.

It is open every weekend in the run-up to Christmas and costs £6 per child. Each visitor receives a present.

Half of the proceeds go to the Lions, who then make donations to children and young people’s charities in the area.

Last year’s event raised £3,000 for the club and a further £1,000 for the Thames Valley Air Ambulance appeal through a “wishing well” collection, which is being repeated this year.

“We get people coming from Oxford, London and even Swindon purely for the grotto because they’ve heard it’s so good.”

Martyn Sheldrake, general manager of the garden centre, said: “We had about 995 children last year so we’re hoping to break the 1,000 mark this year. It’s certainly possible as it’s becoming more popular.”

Councillor Hinton said: “It’s absolutely stunning — everywhere you look in the grotto, so much detail has gone into the design.

“It’s a wonderful place for the children to go and all parents should try to get up here at some point over the festive season.”