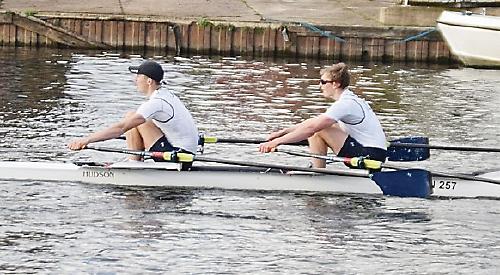 HENLEY Rowing Club juniors were in action in head of the river races last weekend.

Saturday was the Hampton small boats head, one of the big junior heads, with more than 750 entries in small boats.

Wallingford, at 4,500m and a series of bends is also one of the most challenging courses on the Thames.

Fourteen members of the boys’ J15 to J18 squad competed at the small boats head.

With strong competition in all events, the J18 2x- of Balthasar Issa and Bruce Turnell came tantalizingly close to a win, falling short by 1.6 seconds to a Molesey Rowing Club pair in a field of 13.

Demonstrating strength in depth, in J16 2x, Henley had three boats in the top 10 in a field of 40. No other club or school had more than one boat in the top 10.

In Division 1 at Wallingford, the women’s J15 4+ of Holly Tompson, Della Luke, Darcy Smith, Emilia Fulford Dobson and cox Chloe Beeton put in a good performance to record their first victory in a sweep-oared event. In Division 2, the four were joined by Holly Tallent, Poppy Wilson, Annabelle Hoogenberg, Holly Nave and a change of cox to Madison Sturgess to compete in the women’s J15 eights.

Despite having to stop twice, due to being blocked by a rival eight, the girls showed great maturity to recover and continue to row well recording a second place behind Latymer Upper School.

The women’s J16 eight were unable to proceed to the start with a crewmember being taken ill. She was returned safely to the boating area by launch and the remaining crew of seven returning at the end of the division with an accompanying flotilla.

Not to be outdone by the juniors, the club also raced a WMasD eight, a men’s open four and an eight and their respective coaches were pleased with the progress that has been made so far this season.