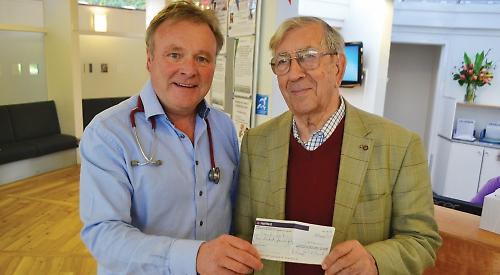 THE club’s twilight meeting on Tuesday last week at the Red Lion Hotel was addressed by Sarah Affleck, the fund-raising and communities manager of Dingley’s Promise.

This charity aims to support children across Berkshire under the age of five but is not attached to a special needs school.

It was set up in 1983 and became a registered charity five years later.

It concentrates on supporting families with young children with various conditions, mainly autism.

Mrs Affleck gave as an example a three-year-old girl named Louise who had been diagnosed with autism and whose mother had found out about the charity through her toddler group.

The main thrust of the work is learn through play sessions, giving the toddlers a pathway to inclusion, so that 60 per cent of the children go on to a mainstream setting. The charity also offers family support.

The Reading Dingley centre is now based at the Kennet Walk Community Centre in Kenavon Drive and two other centres opened in Wokingham and Newbury during the Nineties.

The charity was rebranded last year as Dingley’s Promise, reflecting the promise it sees in every child in their early years and to take the opportunity to support them to reach their full potential.

Stressing that it was reaching out beyond geographical boundaries, the Reading centre having taken a number of children from South Oxfordshire, Mrs Affleck said she hoped the organisation would spread southwards towards Hampshire.

She explained that they were supported by Children in Need, as well as local government, but were always looking to expand their work by accepting donations and encouraging people to become a “friend”.

Mark Harling proposed the vote of thanks, suggesting that the charity was helping to “plug a gap”.

Earlier in the meeting, club president Maria Bunina thanked Rotarians who had assisted with the charity bingo held at the town hall the previous Friday as well as those businesses and individuals who had generously presented prizes.

She particularly mentioned the organisational work of community chairman Maurice Robins, together with secretary Philip Fletcher, who acted as MC in the unavoidable absence of Maurice himself.

The club itself was especially grateful to the voluntary caller Don Maycock, who had been assisting with the event for many years.

It is anticipated that the proceeds from the event will amount to about £1,000, which will be donated to local charities.

Meanwhile, the club has donated £500 towards a project to refurbish a hospital in rural Africa.

A cheque was presented to Dr Philip Unwin, who is a GP at the Hart Surgery in Henley and founder of Kamuli Friends, a charity which has rebuilt a ward at Kamuli Mission Hospital in Uganda.

Dr Unwin, who recently went on a two-week visit to Uganda, said: “The money will go towards kitting out the ward with beds, curtains, mosquito nets and equipment.

“Without good people like Henley Rotary Club they wouldn’t get any of that as there’s no other help there.

“Rotary have been very, very kind to the Kamuli Friends.

“It has supported us for many years now and gives regular donations to the charity.

“Every single one of them is appreciated and valued and we spend it incredibly carefully.”

Rotarian John Grout, who presented the cheque, said: “It’s a worthy cause and we know where the money goes.”

Since its launch in 2012, Kamuli Friends has built new nurses’ accommodation and added a guest house and covered walkway. It has also set up a scheme in which doctors and nurses can volunteer to help at the hospital for up to six months.

• At this week’s lunch meeting, president-elect Peter Thomson reported on the district council meeting held at Christ Church Centre in Henley on November 22. The club had been awarded a pennant for finishing third out of 58 clubs in the district for the amount per capita contributed to the Rotary Foundation, the movement’s international charity.