Children put through their paces 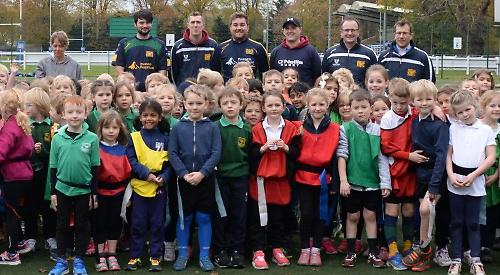 CHILDREN from five primary schools in and around Henley are taking part in coaching sessions at the town’s rugby club.

More than 200 boys and girls from years one and two at Badgemore, Valley Road, Sacred Heart and Shiplake primaries as well as Nettlebed Community School have been receiving two hours’ tuition a week since the start of this academic year.

They have learned the skills needed to play tag rugby, a safer version of the sport in which they “tackle” each other by removing a velcro strip attached to their opponents’ waistbands. Workshops take place on each of the school’s playgrounds and on the artificial “tiger turf” pitch at the club’s headquarters at Dry Leas, off Marlow Road, as part of its new Player Reach-Out Programme, or PROP.

Coaches from Performance Sports lead the youngsters through a series of drills to improve their fitness, co-ordination and passing skills.

They are learning how to place the ball on the touchline to score a try and how to chase an opponent when they are in possession. The programme, which finishes next week, will culminate in a series of games where they can put their new knowledge into practice.

Head coach Chris Ellison said: “It’s a great way for the club to build closer links with the community and give the children an opportunity to take part in the sport, for the first time in many cases.

“It’s been brilliant and we’ve had some amazing feedback from the schools about the quality of the teaching so we consider it a resounding success. Hopefully some of the children will consider joining the club’s minis and juniors section. You can tell from the smiles on their faces and from their energy and enthusiasm that they’ve had a great time. They’ve built a great rapport with the coaches and have done really well in learning new skills.”

He added: “It’s also very beneficial for them to be out of the classroom and exercising outdoors. We would have loved to extend it to the older age groups but the funding wasn’t available.”

A version for older students is also taking place at Gillotts School. Tom Haynes, one of the club’s academy coaches, has been running four lunchtime sessions a week for boys in years seven and eight.