Sixty years of marriage for bride who borrowed her ring 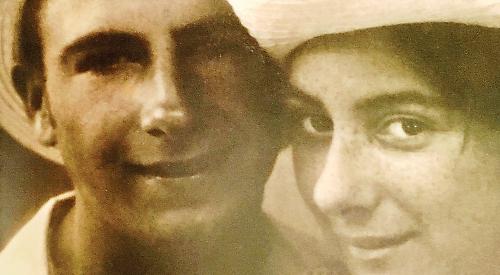 A COUPLE who have lived in Henley all their lives have celebrated their diamond anniversary.

Chris and Ann Eggleton, who have lived at the same house in Gainsborough Crescent since 1963, were married at the town’s register office in Northfield End on November 20, 1957.

They celebrated the occasion with a large family get-together at the Catherine Wheel in Hart Street, Henley, two days before their anniversary and received a congratulations card from the Queen.

The pair have known each other since childhood as they both attended Trinity Primary School and then the old Henley Secondary Modern School in Deanfield Avenue.

Mr Eggleton, now 78, was the youngest of six children and grew up in Mount View, while his 76-year-old wife grew up in Reading Road.

Their relationship began after Mr Eggleton bumped into Ann Laye in Market Place one day. He was then 17 and working as a labourer at a farm in Rotherfield Greys while she was 15 and still at school.

She had just bought a new bicycle and he playfully stole the pump, forcing her to chase him to get it back.

Mrs Eggleton recalled: “I caught up with him and gave him a piece of my mind. I said my mum would be down looking for me because she knew who Chris was and didn’t approve of him.

“She didn’t think he was good enough for me and expected better things. Mum was very strict and would order me to be home by 8pm every day. Imagine trying to get a teenager to do that these days!”

Despite her family’s disapproval, the pair began courting and would regularly meet at the old Odeon cinema in Bell Street. Admission then was a shilling and nine pence, about £1.52 now, and the films they saw included Bill Haley’s 1955 rock musical Rock Around The Clock.

They married two years later when Mrs Eggleton became pregnant with her first child David, who now lives in Gainsborough Road and is a Henley town councillor and co-founder of Gainsborough Residents’ Association.

A small group of friends and family attended the ceremony.

Mrs Eggleton said: “Mum said, ‘there’s no way you’re marrying him’ but we went ahead with it anyway.

“It was a pretty cheap occasion and I had to borrow a wedding ring from a friend.

“Our wedding day fell exactly on the Queen and Duke of Edinburgh’s 10th anniversary, though we didn’t deliberately choose that and only realised a few years afterwards.”

Less than a month after marrying, Mr Eggleton was called up for his National Service, which he spent in Cyprus fighting the EOKA nationalist group’s uprising against British occupation.

During this time, Mrs Eggleton worked at her mother Lilian’s café at Henley station, which operated from an old railway carriage until closing in the Sixties.

When her husband returned, she began working as a cleaner while he took up casual work as a builder.

The couple had four more children, John, Kevin and Michelle, who all still live in Henley, and Kerry. They have 14 grandchildren and 10 great grandchildren.

Mr Eggleton became a self-employed building contractor in the Seventies and remained in the trade until he retired aged 68. When business was slow he took on odd jobs like cleaning and plucking turkeys at the old Simmons butchers in Reading Road.

She then worked in the kitchens at Invesco Perpetual in Henley and the Huntercombe Hall nursing home at Nuffield before retiring at 65.

The couple are both keen gardeners and have won several Henley in Bloom gold awards for their garden displays. In 2013 their efforts were showcased on the BBC’s The One Show when they were visited by the programme’s gardening expert Christine Walkden.

Mrs Eggleton has been volunteering at Henley’s 60+ Club, in Greys Road car park, for the past six years and has chaired its organising committee for the past two. Her husband helps her with gardening and landscaping the front of the premises.

They did not travel widely when their children were growing up but took their first foreign holiday to Cyprus about 30 years ago and have since been as far afield as Australia, Mexico and Tunisia, where they rode camels across the Sahara Desert and tried paragliding.

They have never considered leaving Henley. Mrs Eggleton said: “It’s just such a pleasant place to live. There’s hardly any hooliganism or crime and the people here are wonderful. I can’t imagine living in a big city like London.

“We have lots of community groups and activities, especially for people of our age, though I can understand why it might not be as interesting for young people.”

The pair said patience and a willingness to work together were the secret to a long and happy marriage.

Mr Eggleton said: “I know that in our first few years of marriage I probably didn’t do as much as I should have but I do my share of the chores now and I hope I’m making up for it!

“A lot of our friends’ children have the most elaborate weddings costing upwards of £20,000 and some of them have already broken up.

“We didn’t have that kind of money to spend but several of our neighbours married at a similar time to us and are also still together, so there seems to be something about our generation.

“We all struggled when we were younger and perhaps that makes you appreciate what you have and want to look after it.”

Mrs Eggleton said: “It’s important to learn to tolerate each other. We all have our ups and downs and I don’t think there’s any couple who’ve got by without any disagreements.

“When you're young, you just don’t imagine yourself being with someone for the rest of your life but you settle into a happy way of doing things and the years just go by before you realise it.

“You have to work at it or it will not last. You might sometimes have a big argument or get so angry you could kill them but you make up and deal with things together.”