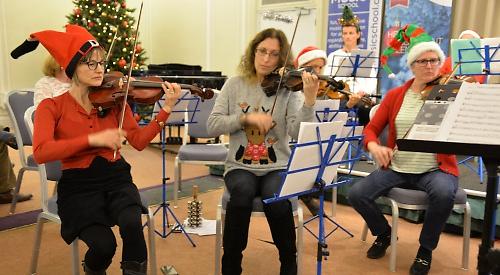 THE Henley Youthful Orchestra played a collection of Christmas classics on the third night of the town’s Living Advent Calendar.

The musicians, led by conductor Stewart Lewins, performed in the Finlay Suite at Phyllis Court Club, off Marlow Road, last night (Sunday) to a crowd of more than 150 people.

They played The Christmas Song, White Christmas, All I Want for Christmas is My Two Front Teeth and Santa Claus is Coming to Town.

The set also included Hark the Herald Angels Sing and Silent Night - to which the audience sang along - Silver Bells, I Wish it Could be Christmas Every Day and We Wish You a Merry Christmas.

The group is part of the Henley Music School, which was founded by Laura Reineke.

Richard Rodway, who chairs the calendar, said: “They really put on a show. There was a great feeling in the room anyway and they raised it up a notch by having a good, old festive sing song.

“Having them out in the cold the last two years it was only fair, because they’re loyal supporters, that they got this wonderful setting in the warm.”

The evening was raising money for the Berkshire MS Therapy Centre, which has a support group in Henley.

Its fundraising manager Sam Harper told the crowd: “Without any help from the NHS or government we really appreciate your support. Thank you to the Living Advent Calendar for having us.”

Raffle prizes included a cuddly reindeer toy which was won by Phyllis Court’s chairwoman Tricia Christmas, who suggested the prize should be auctioned.

After some spirited bidding, the winner was Tony Horsfall, from Caversham and a council member at the private members’ club, with a £30 bid.

Tonight’s performance (Monday) will be held at the River and Rowing Museum.