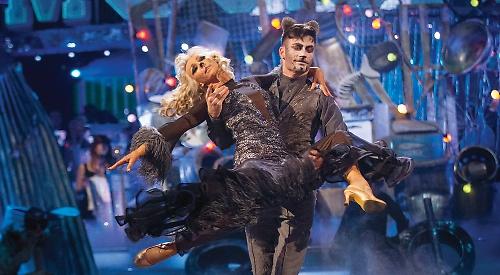 DEBBIE MCGEE danced her way into the semi-finals of Strictly Come Dancing with a feline-themed performance.

The radio presenter, who lives in Wargrave, was once again joint top of the leaderboard after performing the American Smooth to Memory from the hit musical Cats with her professional partner Giovanni Pernice on Saturday’s live BBC show.

The couple were awarded 39 points out of a possible 40 by the judges to share first place with singer Alexandra Burke and her partner Gorka Marquez.

They were dressed in black, sparkly outfits and wore face paint and ears to give them feline features.

Their routine featured a series of spins, pivots and lifts before finishing with an embrace. At the end the pair received a standing ovation from the audience.

Head judge Shirley Ballas joined in the applause and said: “I think it’s going to be a memory etched in everybody’s hearts for a long, long time. It was just beautiful.

“It was intimate, it was polished. I felt every moment with you.”

Fellow judge Darcey Bussell said: “It was stunning — I’m purring with delight. It was the fluidity, how one move ran into the next. My goodness, the co-ordination, the arms and everything, it was exquisite.”

Bruno Tonioli called the routine a “smash hit” adding: “You created a sense of pathos in the room, it was tangible. You took everyone with you in the story. The story arc was told so beautifully, so flawlessly, it was mesmerising.”

When asked for his thoughts on the performance, Craig Revel Horwood simply purred like a cat.

Afterwards, McGee said: “I think I forget I’m 59. I keep thinking I’m 20 and it caught up with me this week but it was all worth it.

“It was just incredible and especially with him [Giovanni] and that amazing choreography.”

McGee’s Sunday morning programme on BBC Radio Berkshire was hosted by Andrew Peach, who read out messages of support from listeners, but she spoke to him about her week.

She said she had been thinking about her late husband, magician Paul Daniels. She said: “Paul had such confidence — he never, ever got nervous so some Saturdays when I’ve got nervous I’ve just had him in my head, saying ‘just give me a bit of your confidence, darling’ and it kind of gives me some strength.

“I kind of feel his power a bit sometimes.”

Prime Minister Theresa May and comedian Miranda Hart are the famous names to come out in support of McGee.

She said she had been worried about performing dressed as a cat in case it came across as “gimmicky” but added: “The make-up and costume people did an amazing job because the balance was just right.

“I never really think about what the scores are going to be because it makes me nervous if I think I’m going to get a 40.

“I just want to enjoy it — I feel like I’m the luckiest girl in the world at the moment.”

McGee said she had repeatedly rehearsed the standing spin so that she barely felt dizzy on the night of the live show.

After arriving home in Willow Lane in the early hours on Sunday, she enjoyed grilled chicken and a jacket potato prepared by her sister Donna.

McGee and Pernice were safely voted through to the semi-final, where they will perform two dances.

Actor Davood Ghadami and his professional partner Nadia Bychkova were voted off after a dance-off with Burke and Marquez.