Why Audrey will always wish 'Aloha' to Henley 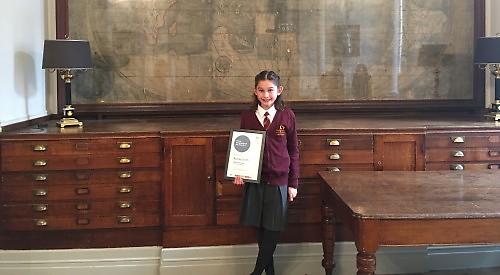 The nine-year-old has lived here with her family for four years after moving from San Francisco.

They are due to return to the US next summer — but not before Audrey left her mark by winning an award from the Royal Geographical Society.

She created a poster all about the Hawaiian islands for the society’s young geographer of the year competition.

Her design, which was inspired by a family holiday to Maui, the second largest island, was chosen from more than 1,600 entries from 250 schools to receive one of only 12 highly commended awards.

Audrey, a pupil at Badgemore Primary School in Hop Gardens, attended the awards ceremony at the society’s headquarters in London with her parents Jenise and Stagen and headteacher Marion Arnold.

She was presented with a certificate in the nine to 11 age category from adventurer Alastair Humphreys.

Audrey said: “We were asked to create an A3 poster all about the social, cultural, political and environmental geography of one of our favourite places in the world.

“Immediately, I had flashbacks to our family holiday in Maui and I knew then that I would do my research on the Hawaiian Islands. Not only does Hawaii have a very interesting geography, nothing beats their ‘Aloha’ spirit!

“Since this was a national competition, I knew that thousands of students would be submitting their work and I hoped that mine would stand out. When I was told that my project was highly commended I was truly speechless.

“While I sat in the hall listening to Alastair Humphreys speak I was a nervous wreck but when he presented me with my award I was beaming with pride.

“I’d really encourage other children to take part in this competition next year — it was an experience that I will never forget.”

The family took the holiday to Hawaii in 2013 shortly before moving to Valley Road.

Mrs Smith said: “Audrey knew Hawaii was quite a special place but I don’t think she really knew how special until she started researching and finding out all these really interesting geographical facts.

“I’m really proud of her. She worked really hard on the poster and I’m so glad it came out how she envisaged. It was really hard for her to fit everything on a piece of A3 paper.”

Mrs Arnold said: “I am incredibly proud. It’s just amazing for Badgemore that we have got a child performing at this high level.

“The detail of Audrey’s project was incredible and when I compared the others in the group hers was fantastic. It was so well presented — she must have spent hours doing it.”

Mrs Smith added: “It was a lovely day in London. It was a really intimate event, which made it even more special.

“We were one of the only state schools represented there. I think Audrey felt a bit like a Henley star!”